Is a dumb picture worth a thousand smart words? 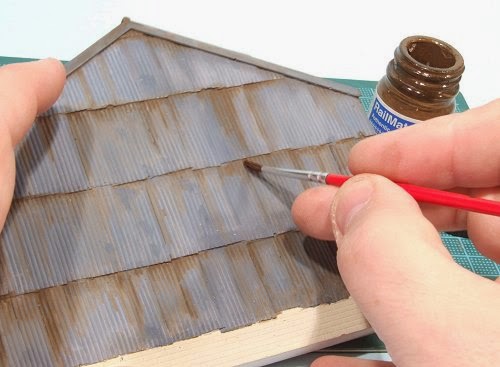 Once upon a time, authors of magazine articles saw very little feedback on their work. The odd letter might wing its way to the editor and, the letter writer would hope, make it to the letters page. Nowadays, we have many more direct methods of communication which sometimes provide feedback, but not always in a helpful way.
Reading stuff on-line is an occupational hazard. Sometimes (rarely) you read nice things but most of the time, those who make the effort to comment are moaning. That's not unusual - how often have you complained about poor service compared to the number of time you've made an effort to compliment good service?
The usual complain is that magazine's have "dumbed down" since some sort of halcyon days years ago. While digging through some 1990s mags this week, I looked to see how true this might be. After all, I don't want to "dumb down" and so expected to learn something.
My specialism is "How to" instructional articles so I ignored those on layouts and any reviews in my reading. What is immediately apparent is that digital photography has changed things dramatically. I illustrate every step of a project as I go - something much harder to do in the past as you relied on film cameras and, as I know to my cost, could easily end up with duff pictures when the shots returned from the processors. If you were a really good photographer with some impressive equipment, you stood a chance but most relied on a few finished shots and long pages of text.
Read the criticism and that's apparently what people want, but I wonder. I've built a few old kits where the instructions are a closely typed page and if I'm honest, I didn't bother reading the stuff.
Far better is to bullet point each step. That's the way recipes are written and Haynes manuals. I find it difficult to believe every cookbook and the mighty Haynes corporation have got it so wrong.
The logical next step is instead of writing long descriptions is to take a photo and show people. Show is, I'm reliably informed, better than tell. Again, follow the Haynes process. The result is a photo with relatively short caption. Is this better? I'd suggest you can see what I'm up to in the photo above without any caption at all. Describing how I paint the rusty streaks on, the patterns etc. would be far more complicated than just looking at a picture.
Of course this does make my articles picture-heavy and the result on the page looks very different from older magazines. However, I feel that this, along with the inclusion of sidebars for hints/tips/prototype information makes the pages much denser with information than some of those of the past which could include a fair amount of waffle. Now, I'm made to cut straight to the chase!
My feeling is that this is better. You certainly find more articles in a modern mag than those from the 1970s, although the much higher modern page counts help this. Some of those who complain also don't want to follow instructions, they prefer to have something to real, not anything wrong in itself, in lieu of making stuff.
Others think I simplify the process too much. If that's a crime, I'm guilty. However, my experience, based on magazine sales figures and talking to people at general shows from behind layouts and stands, is that there are a lot of people at the beginner end of the hobby. Far, far more than in the realm of the experienced modeller (Note: I mean practially experienced from doing some modelling, not just having read books and articles) who probably doesn't need the same level of instruction.
I once had an article on building an etched brass loco kit described as a "mundane activity" on a forum but suspect that for most modellers, it represents a very distant dream to work towards. The poster might knock these things out in his sleep but I still find each one a challenge and I've built a few now.
To compensate, I always try to include the odd tip that would appeal to me if I were the reader. Some unusual approach or suggestion. It's probably ego, but I like to think that most people can get something out of anything I write, even if they never have any plans to try the same project.

Iain Robinson's "exploded diagram" approach in Railway Modeller in the 1980s is yet another approach. Visually appealing, full of tips, they're almost works of art, really. Very few have the skill to pull it off and each one probably took days to complete. They still offer inspiration.

I have a collection of these, they are one of the few things I've pulled out of old mags and filed. You need to be an excellent artist and in terms of time taken vs income recieved, won't make any financial sense.

Even then, I bet someone on a forum would ask why the mag is "full of cartoons"!

Captioned photographs can and do work well, as long as there's plenty of space in the magazine. I've seen a few examples where important stages of a build have been skipped over, probably in the interests of space. One particulary annoying example I found in Model Rail and concerned an etched OO9 kit where the body was covered but the chassis completely ignored (odd really as they are usually pretty good). So you need an editor who is willing to give the article space and allow the subject 'room to breathe'
Presentation is important as well in my opinion, the best example I've recently seen was the Garratt article in Finescale Review no.1. Clear and uncluttered on a plain background, well explained and photographed, and given plenty of space. The subject is perhaps not suitable for the mainstream mags. though.
Photography is a skill in itself, I photograph my own builds for my blog but rarely get results that I'm happy with.
I can't comment on your own stuff though Phil as I never buy BRM.

Paul - I know the 009 article you mean and it amused me. Mostly because I'd built the same chassis (different body), found it not as easy as expected but was allowed the space to cover it all properly. Sometimes you have to buy BRM... :-)