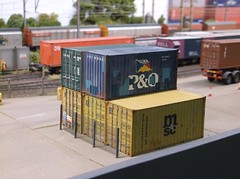 Railex is one of THE shows to attend if you want top pick up lots of modelling bits and pieces in one hall without all that pesky mail-order nonsense. As such, it would be worth the trip even if it wasn't 65 minutes fairly easy drive away. The only problem is that parking is limited so those heading that way on Sunday (when the crowds are lower and talking to people easier) need to get an early start or end up on the (excellent) shuttlebus.

Layouts are normally of the highest quality and this year was no exception. While I spent more time shopping and chatting than leaning on a barrier, Im confident that there wasn't a duff one in attendance.

To celebrate the 50th Anniversary of the 3mm Society being formed, a corner was given over to the scale, possibly the largest collection of such layouts ever seen. 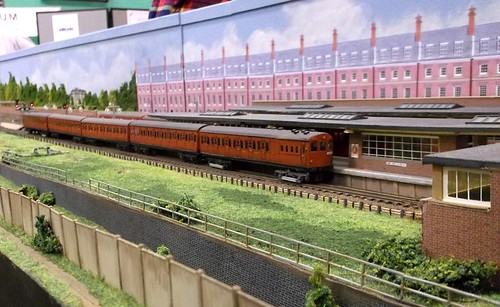 In the middle of the hall we had a rare appearance by Pete Kaizer's superb model of Corris station. 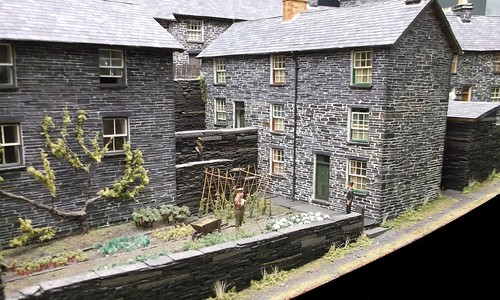 Thanks to the weight of the slate and plaster built scenery, the layout sees less outings than it might, making any appearance special.

While Pete's stock and locos are excellent, my eye is caught by the little details in the scenery such as veg plots and washing lines. These are handled as well as anything you are likely to see. I also had a sneak preview of a couple of new locos he's built - early versions of Talylyn No's 1 and 2 in cabless form. Both are scratchbuilt with only motor and gears bought in. This sort of modelling is incredibly rare in our modern RTR obsessed hobby. Maybe I'm alone, but I'd love to see more of this and less box opening. 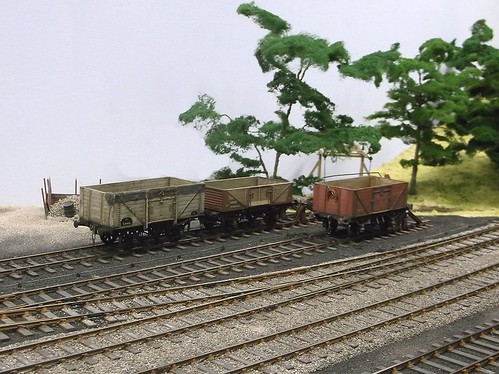 With an eye for detail, I was spotting all sorts of interesting modelling. The ballast bin, roughly assembled out of corrugated iron particularly appealed to me. I know everyone else was eyeing up the G2s trundling around but I know what I like. 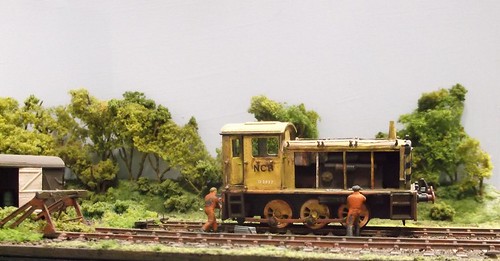 The corner of the P4 Society stand featured a lovely little diorama with an NCB shunter under repair. I say lovely, but I'd an idea for a very similar model so perhaps that will have to wait until everyone has forgotten this one lest someone accuse me of model plagiarism!

The good news is that the shopping list was mostly fulfilled apart from one trader who wasn't there (and never was, I should check the exhibition website properly before I go) but apart from a single set of transfers, everything was for work projects. Like a proper railway modeller, I had a full rucksack by the end of the day.

I'd imagine that a lot of modellers COULD be accused of plagiarism - how many BLTs, allegedly based on God's Wonderful Railway, appeared after something of the same ilk appeared in the pages of a certain, Devon based, journal?

I'm sure I could think of loads of other examples - and I'm sure I wouldn't be alone.

However, I'm not convinced that this stuff matters - we all wish to see GOOD modelling, right?


Anyway, I don't think it's even possible to completely avoid things that have been modelled before - or ideas which other people have used.

You only need to look at US railway modelling forum sites, to see loads of examples of deliberately rough looking locos - often freelance - very heavily weathered - with body panels missing over the engines - and built on HO chassis to a nominal scale of 1:48.

Meanwhile, there are also a number of "standard gauge" examples of similar loco models.

Even if you were to wait about 10 or 20 years to build your "under repair" loco, I'd imagine you'd still find a number of these "critters" on US forum sites. Would you be plagiarising these models? Of course not.


Seriously though, there's bound to be a finite limit to the number of ways you can build or display model any types of model locos (well, model anything, really).

Rather than concentrating on whether or not anyone else might have seen "similar" models elsewhere, shouldn't we all be thinking about building models we like to a standard we're happy with?

After all, I thought this was the basic idea behind model railway books and magazines, in general - showing us how to build models of particular types of loco, scene, or whatever - although I could, of course be wrong.