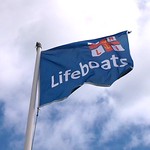 For the last few years, the Lifeboat Enthusiast Society has held a sailing day. The event has moved around the country and this year (and next), it's Knightcote MBCs opportunity to host it.

We're quite well set up for this sort of thing. As well as the pond, on the site there is a small conference centre where talks can be held. For added entertainment, the railway club agreed to open up in case anyone was bored with boats.

I started my day on car parking duty, a chance to wear the hi-vis jacket I bought a few years ago. You can see me from space and on a hot day it's going to be a bit warm, but at least I can pretend to be official. It worked as everyone stopped, to be directed to the correct parking location.

By lunctime we abandoned this as everyone who was coming was there - and ti was an excellent turnout.

Large boats seemed to be the order of the day with several around 5 feet long that required special trolleys to move around. We'd WD40'd the launching ramp the day before and it was working smoothly - but hardly anyone used it. Most were set up to work from the landing stage with the hull being launched and then the superstructure placed on top. 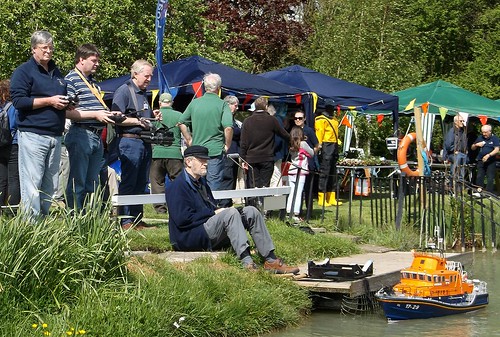 My Brede enjoyed a few laps of the lake until its battery started to run down - I think I need to give it a longer charge or perhaps find a suitable ni-cad.

The talks were entertaining - one on the Arun lifeboats and another by the owner of an ex-RNLI Rother boat. Much as I like the look of the later, owning a real one seems scary expensive and an awful lot of effort. Far more effort than a couple of weeks sailing would seem to justify. I'll stick to models.

The afternoon saw some cracking weather and lots of boats on the water. A good day was had by all and we are looking forward to doing the same next year.

Lifeboat day photos on Flickr
Posted by Phil Parker at 5:30 AM

If you'd had a few hours free to do a quick build, you could also have brought along a 12" Tamar like this:

Actually, the free plans are now at http://eezebilt.co.vu/Tamar.html

A long time ago the RNLI sold kits of their Lifeboats in 00 scale or thereabouts.

Anyone else remember them?

Geezer - Cracking plan. I'm going to print it out and hand it to my Dad. He fancies getting the balsa out.

Anonymous - The kits were whitemetal and 1:100 scale. And I have a few stashed away...

Always with the Dad..! It always seems to be the adults who are attracted to these plans, and they were meant to attract young kids into the hobby... :(

This adult remembers these sort of plans from when he was a boy and now wants to re-live his yout through balsa wood and sanding sealer!