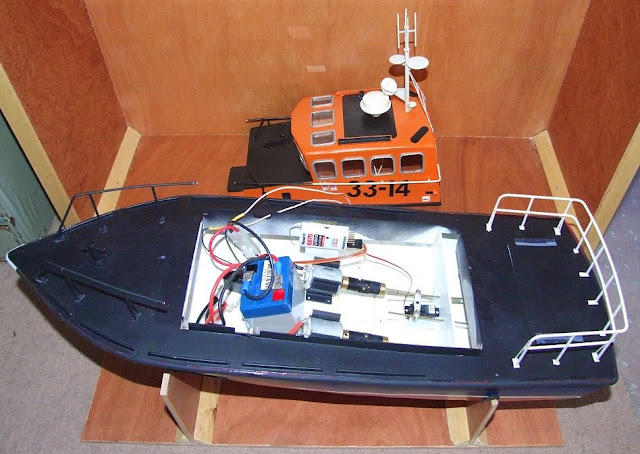 Last week, in preparation for the boat club lifeboat day, I hastily dug out my scratchbuilt Brede Lifeboat planning to give it a sail.
While I built the boat a couple of years ago, it's never really sailed in anger. A little messing around on the water for some magazine photos, but a proper sail? I've never had the time.
﻿
This became obvious when I took the top of it to work out which battery should be fitted. There wasn't one fitted and no obvious place to stick one. A quick look at the magazine article or those photos I've managed to recover on my hard drive didn't help.

Eventually, I decided that something 6V and jelly would do the job. By leaning it on a hull former with some Blu-tack and wedging the top end against the motors, it didn't seem to be going anywhere in a hurry.

Best of all, once charged up, everything worked, so the next day it was off to the water...
Posted by Phil Parker at 5:30 AM