Little Phil puts on his specs 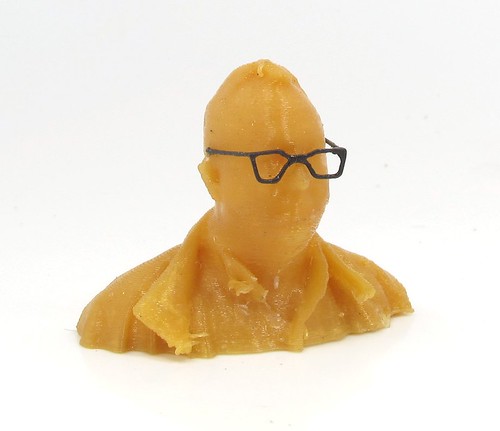 One thing that "Little Phil", the 3cm tall 3D printed model of me was missing, was a pair of glasses.

I've worn 'specs since I was 10 but it seems that 3D scanners struggle with glasses , so like a passport photo, you have to take them off.

Fine, but then it doesn't really look much like me, so yesterday, I spent a few minutes with some 0.33mm brass wire and a soldering iron, making a pair.

It's much harder then it looks to do this. The end result is a bit more rock star (anyone who said Dame Edna Everage can leave now) than I'd like but they will do for the moment.

Incidentally, if you want your own Little Phil, you can download the model:

If you want to know more about the scanner used to do this, it was the Structure scanner in combination with the ItSeez3D app for iPad. And I want one.
Posted by Phil Parker at 5:30 AM

The blue ethereal light coming from the top of your head is a bit worrying...