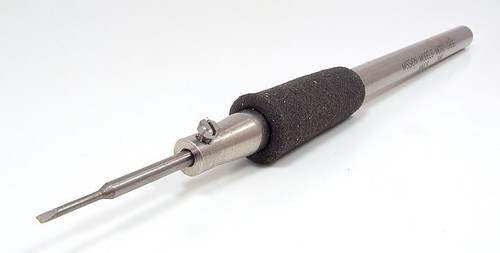 This is a Micro chisel, bought from Little-Cars a few years ago*.

It's very useful as the sharp end is 1mm wide, ideal for removing moulded on detail from model trains whose value on eBay I'm in the process of ruining. The only problem with it was that the bit kept coming loose as it was retained by an Alan bolt. A very tiny Alan bolt that I couldn't find a suitable size key for.

Eventually I decided to do something about it and found a suitable bolt that fitted the thread pretty well. Some serious shortening (hint: put a nut on first and then once you've cut the bolt shorter, remove the nut and this will help-re-cut the damaged thread) later and it screwed into place, holding the bit perfectly.

Not pretty, but it works.

*The chisels aren't on the new site at time of writing.
Posted by Phil Parker at 5:30 AM