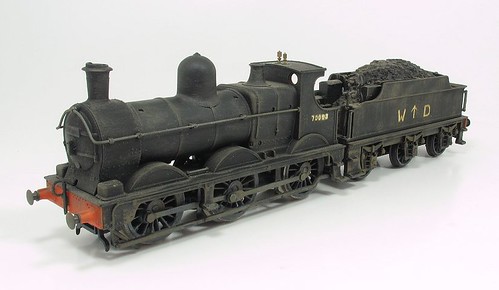 A wartime Deans Goods locomotive, manufactured by Mainline and re-painted into this livery by John Webb, as far as we can tell.

62 of the engines headed abroad during WW1 with 46 of them returning at the end of the conflict. They must have been popular as 108 we requisitioned at the start of WW2. All were fitted with Westinghouse brakes and ten gained pannier tanks and condensing gear.

54 engines made it into BR service, the last being withdrawn in 1957 after a lifetime of nearly 80 years.

This model is destined to find a new home with Chris Mead and run on his wartime layout "Overlord". He's already built a pannier tank fitted version so it will be nice to have a standard one for show visitors to compare this against.

After years stored in a box, the model still lept into life when given some power. Sadly, it was the tender that worked (it's where the motor is), the loco wheels need some oil before they will rotate.
Posted by Phil Parker at 5:30 AM