You used to be able to buy Burberry check paint... 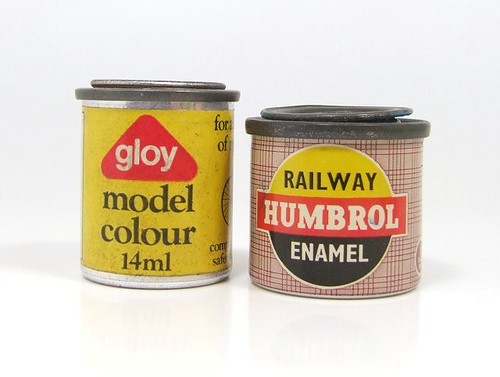 Some old paint tinlets discovered at the back of a drawer.

On the left Gloy enamel that complies with the 1974 Toy Safety regs and has a picture of a penny-farthing bicycle that looks like the one from "The Prisoner" on the side. The tinlet is taller and narrower than the Humbrol version.

I'd assumed this was a 1980s tin as I seem to remember adverts with this distinctive pattern packaging but as the volume is marked as 1/2 Fl Oz, could it be be earlier? Surely by the 1980s, even the Humber Oil Company had gone metric?
Posted by Phil Parker at 5:30 AM

I can certainly recall using tins of your chav hat paint in the 1970s that were old then having been used by father and elder brother. I'd say it's late 50s / early 60s. Maybe it coincided with the release of the Kitmaster Deltic in the late 50s?

I'd also go along with the early 60's for the Humbrol paint.

I'm not sure about the Gloy paint - I never came across the stuff - but the reference to some 1974 regulations suggests 1970s to me.


As for the Humbrol, I suspect it's a lot older than that - if nothing else, the reference to imperial (and not metric) units does date it somewhat.


This stuff got me interested enough to do a Google search - and 2 threads popped straight up from a model kit collecting forum site:


These threads made reference to another site - which shows the evolution of Humbrol paint tins / labels over a number of years:


I don't know if this is of any interest.

I came home from a recent exhibition with an October 1960 Railway Modeller. In the ads, Burberry check tins of Humbrol enamel. Unlike your tin the featured paint was marked as 'One Hour Plastic Enamel', something that might come in usefull these days as I keep reading complaints about Humbrol enamel drying times...

As for the aged 'Muddler, I bought it because there's a good article inside by G. Iliffe Stokes called 'Does Your Railway Live?' illustrated with some wonderfully atmospheric photos. Superb stuff.

The issue with drying times with solvent based paints has recently arisen, the drying agent of choice used by most paint manufacturers was cobalt chloride, that does not meet EU regulations so a substitute has started to be used. I was told of this by a representative of Britains major paint manufacturer about 2 years ago. Since then professional painters have told me that paints are taking approx 25+% longer to dry. I can only assume that similar changes in formulation has taken place with solvent based hobby paints sold in the EU