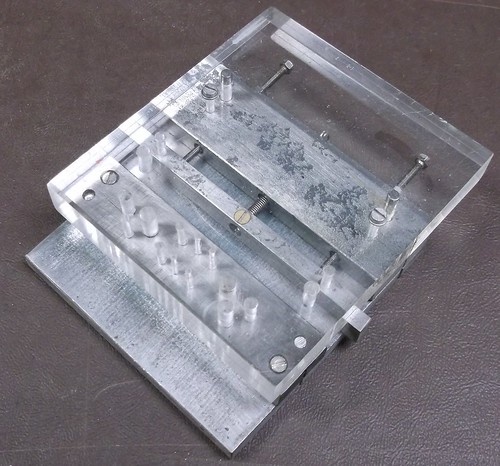 This tool would appears to be a drilling jig and our best guess is that it's for Midland Railway carriage sides. That rectangle of holes would be drilled and then joined up to form a round cornered window. More to the point, you could form a series of such windows that were accurate and identical.

The other holes are still a mystery and the guess above might be wide of the mark.

One of our members has claimed this as he thinks he has a use for it. As an engineer, he recognises the quality of the device so at least one has a good home.
Posted by Phil Parker at 5:30 AM

I can think of another engineer who recognises the quality of these home made tools ... .

Whether it's a clear acrylic hole drilling jig for carriage windows (with accurately positioned vertical pilot holes) - or a movable bed riveter / centre punch (with the workpiece able to be positioned repeatably, using a screw drive) - these are good tools, built by somebody who clearly knew exactly what he intended to use them for.

The only problem I can see is that these pictures might give some of us ideas for homebrew tools of our own.