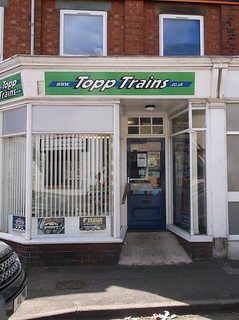 People are always talking about model shops closing down, but there is some good news as others are opening up.

Topp Trains is a relatively new shop but in the few years since it opened its doors, the display space has doubled in size!

Entering the shop you find paint, modelling materials, wagon kits, tools, card building kits, Peco stuff and the counter. Next door is a room full of RTR trains, both new and second hand.

Prices on rolling stock range from the reasonable down to stonking bargains amongst the second hand stuff. I left with an Airfix 0-4-2 and autocoach for a mere £15 for the pair. OK, they were fitted with EM gauge wheels but these alone are worth the money.

Underneath this box was a Dapol Sprinter for a tenner. Not the best model in the world but for 10 quid?

Bachmann and Hornby ranges were well represented in both 2 and 4mm scales. If, like me, you prefer to try before you buy then you'll be well looked after.

Both Humbrol and Railmatch paints are available as well as loads of plastic sheet and strip (Evergreen and Slaters).

For a new(ish) shop, the best thing is there is already plenty of rummaging to be done. I circled it three time finding new goodies on each trip. There were plenty of ranges not normally found such as Peedie Models and the more obscure Gaugemaster bits like laser-cut sheds. That's a good sign for the keener enthusiast and a sign that the place is also run by modellers who know we need more than just train sets.

If you don't fancy the trip to Stafford, there is also a website.