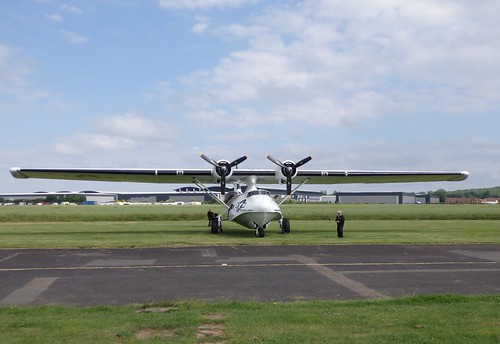 I'm not really an aircraft nerd, but I do find them interesting. My dad is much more of a fan and a particular favourite of his is the PBY-Catalina seaplane. Not a common 'plane at the best of times, and one he had never actually seen.

This changed last Saturday as I was browing Twitter and spotted a photo of a "Cat" that said it was parked up at Wellesbourne airfield. That's only 15 minutes away, and has an excellent cafe to boot.

A quick check showed that the 'plane had landed the day before, but didn't show a subsequent take-off, so we ranced over in the car and were delighted to see the aircraft parked up behind the cafe. Air nerds note, the route includes what the satnav should describe as "turn left at the Vulcan bomber".

Better still, as we gawped and took photos, the crew arrived and told us take-off would be in 90 minutes. Well, Wellesbourne is a busy little airport, and we had tea, so decided to wait.

The aeroplane is G-PBYA, normally found at Duxford air museum. It was taking part in the nearby Midlands Air Festival, but that's just buzzing the crowds. We were seeing it close-up.

Just over half an hour before departure, the engines were fired up and final checks made. The craft taxied out to the runway, but had to wait - for a Vampire jet to take off, and those things are really noisy!

Both of use were a bit surprised how small the Catalina is, but then when you've only seen models, it's difficult to judge. It's an odd looking aircraft really, but maybe that's what's so appealing. The only question is, Airfix, Revell, Academy or another for the plastic kit?

Hello Phil, Great 'spot'! As you say not many left out there of this wonderfully characteristic plane. I can remember building the Airfix kit when I was young and according to the Scalemates site https://www.scalemates.com/kits/airfix-a05007-consolidated-pby-5a-catalina--649763 it has been available over the years up until 2008. No doubt the kit could do with a makeover using modern technology and materials but it would be good to see it available again. Woody.

Or how about a taxiable model for the boating lake? Perhaps with the Loch Ness lifeboat to accompany it?

Actually, there is a Playmobil seaplane in the stash for just such a conversion...