Holiday photos: Brussels for the Atomium 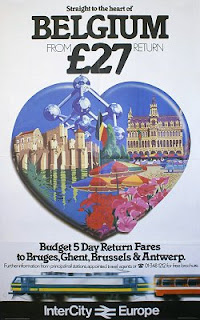 Many years ago, I remember a poster on platform 2 of my local railway station.

It advertised the delights of continental railway travel. To a youth who had been abroad only once, something many of today's kids will find amazing, it all looked very exotic.

What caught my eye was the amazing silver building on the Belgium poster. In those pre-internet days, I had to do a little digging to find out what it was, but once I did, I decided that one day I would visit The Atomium.

I've always been fascinated by tall buildings. On that one and only school trip to France, we managed to reach the second level of the Eiffel Tower. It was a highlight of the trip, even though I didn't realise the teachers had bulk bought tickets, and so handed my cash over to the attendant - he took it AND my ticket the theiving b***ard. I've also copped (to use the railway term) the mini Eiffel in Prague and CN Tower plus London Eye. The Shard is on the list for a future trip.

Anyway, after only about 30 years, I finally got here: 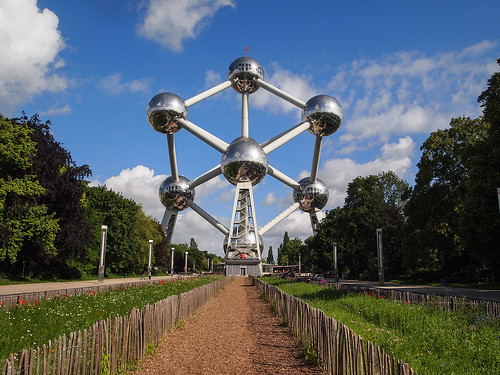 And it was brilliant.

Arriving by tram at Esplandae station, a five-minute stroll soon had me glimpsing the shiny balls between the trees, hightening the excitement of finally getting here. (Note: I know Heysel is closer, but it's a dump and Esplanade has an fascinating tram-turning loop).

Built for the 1958 World's Fair, there's a lot of history to read, and I drank it all in. Every information board, every film. When it's taken 30 years, and a very reasonable 25 Euros (including the Design Museum and Mini-Europe) to get to, I think it's sensible to wring everything out of the trip. If the art instillations are a bit pretentious, who cares when you are standing in a giant, silver ball?

Even coffee (4.50 Euros, not much more than Costa) at the top floor restaurant, was special. OK, mainly for the view, but also because I'd finally made it.

What strikes me, is that the Worlds Fair that gave birth to this building was a facinating period of tremendous optimism. People looked to the future and were willing to embrace it. Part of the display shows some of the other pavillions, most of which are long gone, and they were properly radical. A future designed by Gerry Anderson. I wondered what happened the next day as I queued in the Eurostar terminal and realised the only poster advertising the UK was for the ficticious, rose-tinted history of Downton Abbey. Are we a country now retreating into a past that never really existed?

Anyway, you want photos: Head over to Flickr for the full album.

Next Sunday. Mini-Europe. An unexpected gem of a political model village.