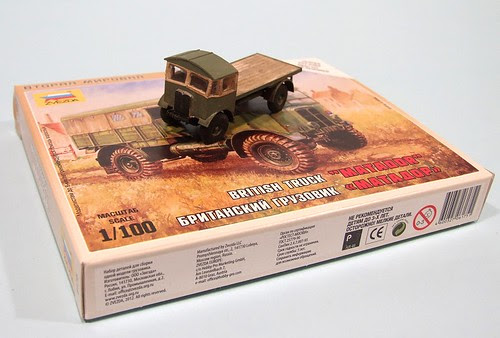 Around 9000 AEC Matadors were built fro both the Army and RAF. According to Wikipedia, the flat fronted cab was framed in ash, clad with steel. Whatever, the simple design has made them a popular subject with modellers for many year. It's a far easier shape to make than the curvy, but probably more useful, Bedford.

After military use, many lorries found their way into civilian roles. Sadly, not nearly as many as railway modellers would have liked. Plenty of layouts in the old days saw ex-Airfix models pressed into use. Most civvies were recovery or heavy haulage trucks - positively massive compared to their companions on the road.

Anyway, while 4mm modellers are over-supplied with nice de-cast models, 3mm scale fans can chose from Continental stuff at too small a scale or pretending that HO models are right. Thus, the appearance of a Russian plastic kit for a Matador by Zvezda was welcomed by the community. Some preliminary measurements indicate it's not perfect (sligthly too tall, slightly too wide and a bit short) but we'll take it.

The kit is intended as a wargaming model. It is made of a nasty, brittle plastic. Construction is glue-free and the windows are solid.

I opened out the windows, did away with the glue-freeness, bust an axle (repaired with plastic filler) and threw the rather odd "crew-cab" style tilt away. A replacement scratchbuilt out of plastic sheet makes the model look rather less massive than it otherwise might.

Zvezda Matador at ModelZone
Posted by Phil Parker at 5:30 AM

I'm nearly done with an Airfix Matador--I got itchy fingers while waiting for Cooper Craft to restock their AEC Monarch kits. An RMWeb post by Mr. Cooper Craft indicates his moulding machine is now functioning and my order via Kernow should eventually be filled. I'm still planning a pantechnicon conversion for a Monarch.

The Airfix Matador is a decent kit but I really dislike having to supply my own glazing.

I usually use Krystal Klear for glazing as I'm a bit hopeless with the plastic version if it's supplied.

Only just caught up with this post.
Been meaning get one of these since before Christmas to go with their Opel and Zis, both still unmade.
Thanks for the information and a belated Happy New Year Phil.