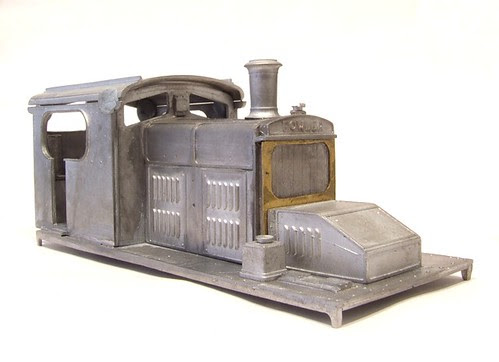 Looking at the Fowler shunters upperworks provides me with a bit of dilemma. On first inspection, I've not done too bad a job with the whitemetal parts. They are soldered together pretty well with really tiny amounts of solder. Smug people looking at the cab roof will be saddened to know that those blobs are Blu-tack holding it in place before detail and paint.

This must have been one of my first attempts at low-melt soldering, a process that separates the men from the boys. The very concept of approaching metal with such a low melting point with a hot iron terrifies most sensible modellers. I probably used a 12V iron run off the back of an old H&M Controller. Nowadays I'd go for my Maplin cheapo variable temperature unit, or for castings this chunky, a normal iron and work fast.

They are massive bits of metal - the entire loco weighs in at 600g with a few more parts to add.

All of this is as per the instructions. Unfortunately there is a slight snag. If you read this excellent web page, then you'll realise that should I wish to model the LMS version of this loco (I do, the livery is a lot easier), there are quite a few differences that the kitmaker ignored. Checking my copy of "LMS Diesel Locomotives and Railcars" shows that while I have placed the auxiliary engine on the correct side of the footplate, this should be half as wide again. Worse, the louvres show above should be half way up the bonnet side and there are only a single line of them. To cap it all, the sandboxes aren't chubby enough either.

This leaves me with a decision to make. The sensible option is probably to dismantle the body by boiling it in water, then re-assemble the model to represent GWR No.1. Trouble is, I think this engine was fully lined out and quite frankly, I am confident I'll mess this up and the results will look horrible. Anyway, what normal person wants a Great Western loco, even one that will offend the purists?

Another option would be to scrape away the excess louvres and make new ones. How do I do that? Well, if we assume I don't have access to machine tools, then probably badly.

Finally, what about an industrial engine that never saw main-line service? That would work as several of these machines were built and a version with the options I'm using isn't out of the question.

After writing all this, I think I have a plan. I do want the LMS machine. I can't alter the louvres so they will be left alone. I could make a new auxiliary engine box, which will balance the proportions up a bit. If anyone spots the other anomalies, then I'll hold my hands up and admit the model is less than perfect. However it is MY model and it's MY train set so I'm not going to worry about it.
Posted by Phil Parker at 5:30 AM

Could 3D printing be the answer to making the louvres - printed with a disposable sprue to ensure the correct spacing.

An easier way than printing individual louvres on a sprue would probably be to simply print the side panels with louvres in the correct place. Mind you I'm not sure quite how those panels are fitted, are they part of a much bigger block of metal? Would they be easy to cut out?

I think something like the Archer 3D transfers would probably work. These are made from reasin and if I cleaned away the old louvres, could replace them.

To be honest, this gets dangerously like serious scratchbuilding.