Funny what happens when people know you are a railway modeller. Mostly they find boxes of old trains in the loft and ask if you know anyone who wants to buy them. Normally, it's a pile of old toy train junk worth about £3.50 which its owner thinks will buy him a new Ferrari.

This time though, we have something interesting.

It seems that back in the 1980s a friend was stationed in Berlin as part of his army service. Every so often he would head to the Eastern side of the city where Western money was prized. There, model trains were stupidly cheap and so he gradually acquired a few, as did his comrades.

The models are by Berliner TT Bahnen and 1:120 scale - continental TT.

According to Wikipedia, Berliner TT Bahnen was originally called Zeuke but changed its name on being nationalised in 1972. I love the ideal of a nationalised model railway manufacturer. Sory of Hornby meets British Leyland, although that doesn't sound like a recipe for innovation or quality...

The company became Tillig in 1993 and still exists. You can visit their website.

Anyway, the first two items I've dug out of the box are a set labeled "good play" containing a pair of railbuses, and 0-8-0 tank engine, 2 coaches and 2 wagons. The loco certainly doesn't look to have been run but given a taste of 12V DC, the wheels rotate and the valve gear waggles. It's charming.

There are several individual locos, one of which is shown below - a diesel shunter. This is still in the catalogue albeit with finer flanges and separate wire handrails.

What's this lot worth? No idea. One dealer reckons that no one wants East German stuff so the best price for a loco is a fiver. I think he's wrong. Surely pre-Berlin wall fall stuff is rarer? I'm certainly fascinated by it and would probably buy the lot except that I really don't need any more toy trains, especially in a scale I don't work in and using track I don't have.

Can anyone shed any light on these for me? 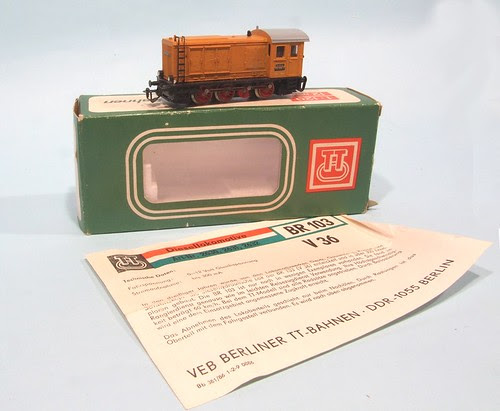 He deals with a lot of continental, is multi-lingual and maybe able to shed more light on things.

The 009 Society Second Hand Sales sometimes sells Zeuke/Berliner Bahn.
However we do price it cheaply, then we have a tendency to price non 009 stuff cheaply. We sold a load of 00, including part made brass coach kits and older rtr Hornby recently at give away prices. Our philosophy on it is use the loco bodies on an N gauge chassis, you can make a decent German NG loco from some of the steam locos, and very passable diesels. Then some members use the chassis for 00n3.

I remember these as Zeuke, they really are rather lovely, as is the packaging. I'm sure there will be collectors out there for this tasty stuff...If only I had the moolah!

Agree with Bill on offering it to the 009 Society sales stand. You could even bring it to the Beds & Bucks members day at Barton-le-Clay on Sunday - looks like a good show!

I have a bunch of this I got Germany in 1988, I've been trying to find a buyer