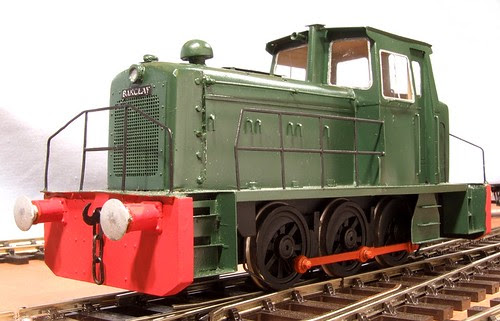 If you want to build a model railway layout, at some point you'll need a locomotive. I'm knocking up an O gauge layout, so I need an O gauge loco. The trouble is, the layout is based around a Dapol Class 08 diesel and this won't be available for months.

Once upon a time I aspired to building in 7mm scale. Our layout got as far as a couple of baseboards and some C&L based pointwork. Then other projects happened (Flockburgh mainly), the boards moved to the shed, where they still are, and the points were stored in the stock box for the model.

The stock box doesn't just contain trackwork, it has locos and wagons too. Just because I didn't build the model doesn't mean I didn't construct some stock. One of the models in there was this Barclay industrial.

By rights, I shouldn't have this model at all. Bought as a kit from the second hand stall at Warley years ago, I built it to see if there was any money to be made. Having picked up some wheels, I made up the etched Wychbury Loco Works parts into this rather handsome beast.

From there, the loco spent some time on eBay and then out club second hand stall. Priced at a slightly negotiable £350, the best offer I had was a derisory amount less than the cost of the parts, so I hung on to it.

Now, I'm glad I did. It's a perfect test machine. As long as I'm careful with those side handrails, there's not much to damage. The model runs perfectly, even on a 1960s H&M controller. At around 13mm shorter than an 08, I can check siding and headshunt lengths. It's been hauling a couple of wagons around for the last week perfectly well. There's a bit of dust around for baseboard drilling but this model will be simple enough to clean.

So, if you want to buy this loco, tough. I'm keeping it. Sometime it will be weathered and the cab will fill with crew. Maybe a re-paint is in order with one of those funky modern liveries but I quite like green and anything else would mean more work. but who knows?

The kit is now available from Mercian Models
Posted by Phil Parker at 5:30 AM