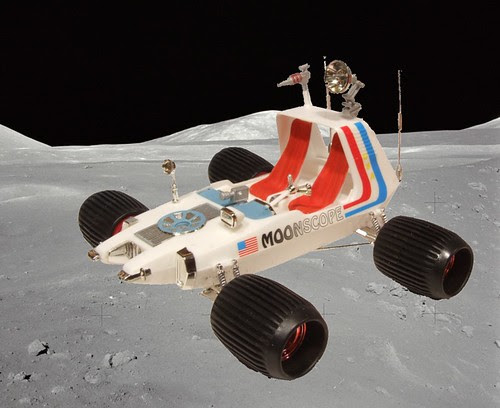 Recently discovered in NASA archives is an alternative design for the famous lunar rover. While the version launched might have been practical, it didn't really fit in with the groovy 60s and 70s vibe. In an effort to engage the kids, it was decided to ask George Barris, designer of the original Batmobile, to come up with something new. The result is shown above. Sadly, the moon launch programme was cancelled just before it was sent into space. It's interesting that in addition to the usual radio antenna and video camera, Barris has been asked to include a ray gun. Maybe some of those rumours about alien finds are true?

In reality, this is an AMT Moonscope plastic kit assembled by my dad. Not the easiest kit in the world as part fit isn't brilliant. There are plastic bits included that aren't mentioned on the instructions including a rather nice windscreen to keep the astronauts visors clean.

There are lots of chromed bits, which is what you want on a custom car kit, more than shown on the box lid for some reason. The wheels are chromed but shown as red on the box. I used some Humbrol translucent paint for this effect and it's gone quite well.

The kit was also offered branded as a spin off from the TV Series Space 1999 "The Alien" although this version included a covered canopy, moon display base and figure. Prices of these are many times the tenner I paid for this kit!

It's not completely a flight of fancy. Barris really did design Moonscope but it looks very little like the miniature version. See the full-sized version on his website.
Posted by Phil Parker at 5:30 AM

Thanks for posting this. Your father did a very good build of this kit. The Moonscope is an interesting kit and has lots of potential for customizations - albeit with a certain ‘60s style attached. In the early ‘70s Ira Dahm published a series of articles in the old Car Model magazine on 4 different custom cars using the Moonscope as the starting point:

I enjoy reading your blog every day. Keep up the good work!

Thanks for the comment and those links. Absolutely fascinating. I may have spent the best part of an hour going through the site!

I built the original kit back in 1970 and still have it in excellent shape. When AMT reissued the Moonscope in '02 I bought and built it. I became interested in the kit at that time and research showed me that I had missed the Space 1999 version that was originally released in 1976. Now that it has been reissued (2014) I'll have my chance to build it and have all three cersions on my shelf. Fun kit but does require some care and patience to build well.