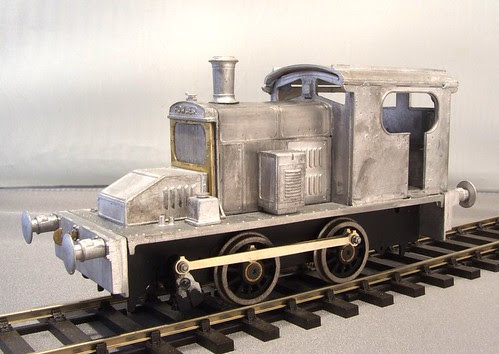 While digging in the O gauge stock box to find the Barclay Diesel, I unearthed yet another half-finished project from my collection. This ones an Eric Underhill kit for the Fowler diesel shunter, GWR Number 1.

I bought this model at least 10 years ago from Tennants Trains in Halesowen. At the time it came complete for a nice, round, £100. That might seem like a reasonable price for a 7mm kit but I can assure you that it was a heafty chunk of cash for me to spend pretty much on a whim at the time. Admittedly this is a loco that I've always wanted to build. There wasn't much chance of doing it in 4mm scale either as it's not very big - squeezing a motor in would be "interesting". On the other hand I could afford it, and we were building a club O gauge layout as well as dreaming up a personal project at the time.
The model progressed to running stage with the main lumps of body assembled (more on both of these later in the week) but then the personal project was abandoned, others appeared on the workbench and the Fowler was stuck in the box carefully wrapped and awaiting a revival of interest.

Well, that time has come. I need a project for the blog. I need to reduce my stack of unfinished models. I need to complete the little Fowler.