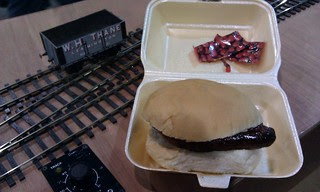 To quote the BBC for a moment:

OH NO THERE IS A SNOWFLAKE IN SOUTH LONDON AND PANIC BUYING OF SUN DRIED TOMATO CIABATTAS OMG WE'RE ALL GOING TO DIE OMG OMG DOOMED WE'RE FINISHED OMG IT'S ALL OVER !!!!!!!!!!!!!!!!!!!

We drove to the showground at 6:30am, splashing through the puddles having not bothered to scrape the ice off the car - because there wasn't any.

That early start meant that after a couple of hours bringing the last layouts and traders into the hall (more mopping) I was was ready for a delicious breakfast bap from the restaurant. For £3.50, you can chose three items and I picked sausage, sausage and sausage. Since you should always have a vegetable with a meal, I added tomato ketchup. And tea.

After this, the day passed in a whirl of conversations. I'm pleased that so many people recognised the layout from it's magazine appearances. Better still, they were happy to chat and we came up with a few minor changes to the original plan. I'll be mulling these over and some will doubtless appear on the layout.

Sadly, thanks to the weather and despite my appearance on local radio for 2 minutes at 8:20am, numbers were well down on previous years. Those that did visit found the usual excellent selection of layouts and trade. Yes, there were a few no-shows for each but at least they generally let us know by 'phone. Most of them anyway.

Anyway, in the last hour, I took the opportunity to borrow a new shunter for the layout. A Garratt from Mercian Models. Despite not having run for a year, the locomotive trundled around perfectly and looked fantastic. It's short enough that I could even shunt with it if I chose - and I did, to the amusement of some visitors who particularly wanted to see it run.

The layout acquitted itself very well. I think there is an odd power-loss in one point, probably due to a dirty switchblade. Apart from that, perfect. Let's hope Sunday is as good. I wonder if I should have egg in my bap this time? 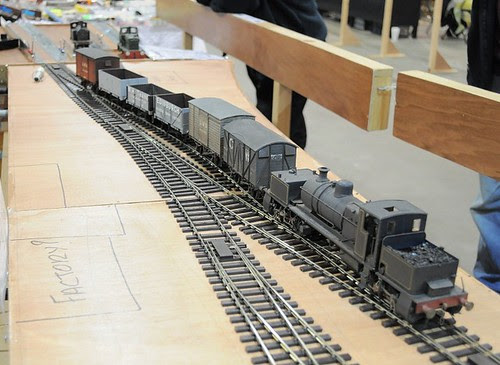 Go for the egg-you need the protein!

I suspect that would just be a recepie for eggy jumper.