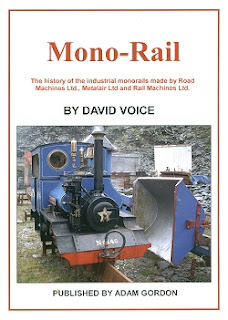 With an eye to the more "interesting" railways, this is an obvious addition to my bookshelf.

Subtitled "The History of the industrial monorails made by Road Machines Ltd., Metalair Ltd and Rail Machines Ltd." the cover might mislead readers on a couple of counts. First, Road Machines Limited made monorail based vehicles, not road machines. Originally, the intention was to produce dump trucks and other construction machinery but the monorails were the most popular product.

Second, the steam engine on the front cover isn't representative of the firms output. It's pretty and certainly unique but the bread and butter products were ugly skips on a rail. Ugly to some anyway, personally, I find them fascinating.

The slim, perfect bound, A4 sized publication takes the reader through the entire history of this particular monorail system. The biggest surprise is just how ubiquitous it was. In 1966 there were 800 users! 100 sewage farms, many building sites, London Transport and one James Bond film all used the system.

Well illustrated with B&W photographs and plans, the 50 pages cover a system that I was largely unaware of. Whether I could now build a model of it, I'm not sure but it's certainly tempting. The text is as solid block of information. I doubt there is much missing.

Sadly, the words are a bit clunky and don't really flow. There's nothing wrong with that, you just don't want to read it as a conventional book. There's also a 17 item errata slip included. I know how easy it is for the odd mistake to slip though, and to be honest you'd probably not spot any of these if you weren't told, but this doesn't give a great impression.

On the other hand, this is a very reasonably priced book at a tenner. The system it describes is fascinating and I doubt you will ever need a second volume on the subject. A massive amount of research has gone into writing this. The system was normally hidden away from the public gaze and at the time, enthusiasts of the time will have been pointing their cameras at the main line. It's a good job there are plenty of official photos.

Highly recommended for those who like their prototypes a little odd.

Rail Machines website
Posted by Phil Parker at 5:30 AM