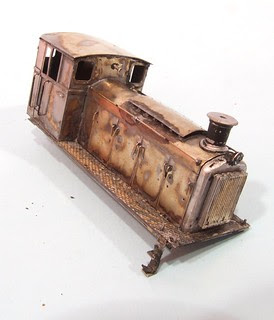 Removing the paint from the WD Barlcay should be easy - it's an etched brass kit so I could dunk it in paint stripper and return the model to bare metal.

The right stripper choice was imperative as I couldn't remember which bits were glued on and which were soldered. Nitromoors is fine but it eats glue. My preferred option was Precision Paints Modelstrip. When I looked  at my bottles, one was empty (where had it gone?) and the other contained about 2 egg cup fulls of well-used liquid. Not enough to do the job.

Not a problem, I think, my local modelship has had a pot of modelstrip on the shelf for years. I'll go and get it. Except it had been sold and there wasn't any in the stock room. The owner suggested that I could try "Mr Muscle" oven cleaner from the 99p shop as that often worked.

Good thinking. It's not actually "Mr Muscle, the packaging might be orange and look at lot like the real thing but it's called "Dr Magic". Still only 99p though.

The model was popped in a jar and sprayed with the cleaner. I put the lid back on and left it for a couple of hours.

At the sink, things looked promising. A scrub with a toothbrush, poke with scalpel and general prod saw some paint peel off in sheets. I reckoned that if I gave it another dip, I'd get the rest. So, the jar was re-filled with loads of the foam and left overnight.

In the morning, prodding and brushing resulted in what you see. Apart from the "chimney", the model is paint free. I don't know how it has discoloured the nickel silver but that will soon vanish under some paint.

There's plenty left in the can too. I could clean an oven with it.
Posted by Phil Parker at 5:30 AM

For future reference Dettol works really well too; I've used it on white metal and plastic (sometimes glued together) without any problems. The downside is that Dettol stinks although the models stop smelling too bad after a day or so, or some new paint.

This looks very promising, and thanks for the tip!