Toys are big business. Just how big a business was brought home to me as I gathered up the free magazines and bag at the entrance to the Olympia exhibition venue on Tuesday. It's a long while since I've been to a trade show and none of the webby ones I turned up at handed out enough paper to make a telephone director jealous and then expected you to carry it around. Clever people picked them up on the way out.

I'd blagged a ticket on the basis of my MREmag editorship and picked up a badge marked "Media" at the entrance. Luckily, I'd taken a decent camera and intended to shoot as many new railway and boat products as I could. These would then be dispatched to the appropriate magazines in the hope I could cover the cost of my train ticket.

Needless to say, that means you lot don't get to see any boats or trains because I need these for other reasons. What you do get to look at are the weird and interesting bits.

The show is huge. Covering the floor of the exhibition centre as well as the balcony, everyone has very clearly marked out space. Many of the stands have only a single entrance so you can't casually walk on and off. Some scan the badge of any visitor for their records, presumably I can expect some interesting e-mail in the future.

Anyway, model of the day for me has to be the Dragon 1:72nd scale Saturn 5 rocket. At 1.5m tall, I'm already trying to work out how to incorporate it into a OO layout. I know what you're thinking, it's an American machine so they should have produced it in 1:87 or HO. That's true but I reckon it's only a little more surreal than Triang Battlespace.

Dr Who is 50 this year so punters will be able to get their hands on a 50th Anniversary Dalek, which looks rubbish to me but then I'm not convinced by any Dr after Tom Baker so I'm probably not the target market. If you are, then you'll be pleased to know that sonic screwdrivers through the ages and miniatures of the new assistant are on the way too. 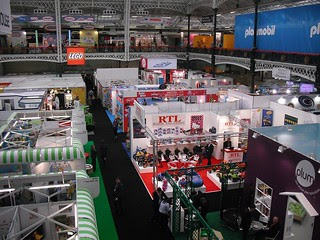 I did venture onto the Hornby/Airfix/Scalextric stand for a while. Men in suits were too busy to talk but I did get a look at some of the new materials, well those not represented by empty jars anyway. The Demolition Derby car sets look fun with Lego-like vehicles that can be built and crashed. This won a best product award so I'm not alone in being keen.

Finally, I headed for the Lego stand. A real warren of stuff. The plastic bricks are doing a lot of licencing this year with Teenage Mutant Ninga Turtles and Lone Ranger ranges appearing. Interestingly, you couldn't take pictures of the later as they haven't finalised it yet. The man in charge was a bit scary too - a sort of chubby ranger complete with horse costume hung around his waist. Talking to one of his colleagues, apparently he loves doing this and has a new costume every year.

By the end, I had photos and a sore shoulder from carrying the ever heavier bag. It looks like there will be lots of goodies for Christmas next year. In fact if everyone there does reasonable business then Santa's sack is going to be bulging.

More photos from the Toy Fair
Posted by Phil Parker at 5:30 AM

It's a shame there Saturn V , doesn't seem to included the mobile launcher, it would make a nice model where you slowly ran the Saturn V out of the VAB to the launch site.

Now THAT would be a heck of a kit. Radio controlled of course...