Prototype for everything - Sleepers vs slitting disk 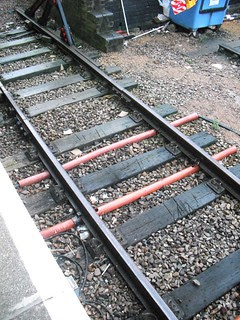 Loitering at Leamington station awaiting a train, I wandered up and down the platform to keep myself warm. Looking over the edge of Platform 1, I was intrigued by the sleepers.

They show all the signs of being attacked by a slitting disk being used to cut the copper surfaces of PCB track. We do this to stop electric juice flowing from one rail to another. Quite why they feel the need to do the same on the prototype, I don't know. Maybe the sleepers are wood-effect metal?

To think that (other, not me) people go to all the trouble of filling the grooves left by the insulating process to preserve the top surface. As it turns out, I was right all along!

Looking under the buffer stop, there is another prototype for anything, silver/grey sleepers.

Lots of people think that sleepers weather like normal wood and paint then grey to show this. Truth is, sleepers are pressure soaked in creosote  and then get a coat of brown railway muck on them. If they start to go grey, even Network Rail rips them out and bungs then in the bin. Real railway companies certainly wouldn't countenance anything other than brown wood between the tracks.

This isn't the case under the buffers though. We don't bother maintaining this bit, so the preservative has long since washed away and they really are grey and rotten. But only the ones where the trains don't go.
Posted by Phil Parker at 5:30 AM

Nice one, Phil. I think there'd be a bit of muttering about the lack of ballast round the edges from the club expert, too, if that was a model!