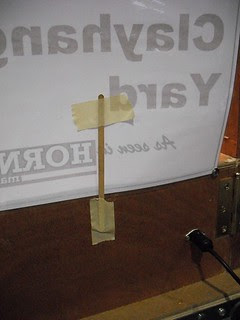 Today, the weather forecast said, "Light snow starting at noon". What we got was light snow starting at 8am. My first job of the day involved standing by the door, letting people into the building. Since it's a fire door, there isn't a handle on the outside so you can prop the thing open and freeze everyone, or some mug has to watch for arrivals and open it.

Thanks to the weather, the day was quiet. Despite this, I had more good chat about Clayhanger Yard. One thing I have learnt is that it should be pronounced "Clanger Yard" as in the knitted creatures who used to live on the moon. Saying it as "Clay-hanger" marks one out as a toff or even worse, a southerner.

On the board, I've been marking out scenery and today, added and embankment and pile of coal. The later will be explained later this week. People looked at me a bit strange but once I explained what I was doing they patted me on the head and told me I'd be all right one day. I'm assuming those looks were enthusiasm and not pity...

Operating the model is more interesting than expected. Despite the short loop, it seems possible that moving wagons around won't be too tedious. I might have to invent a shunting game to help but at least everything worked.

The photo, in case you are wondering, shows the Clayhanger Yard name sign. I laminated it , pinned this to the back of the board and then tapped a coffee stirrer to this as a support. It worked well - must remember that for another time.

By the end of the day, the traders reported decent business despite the lack of numbers. It seems that punters who made the effort were enthusiasts who were spending money. A good few families braved the snow as well today which was nice to see. A few even went home clutching a bargain from the second hand stall.

Hopefully as I write, everyone is arriving safely back home. A few left early to cover as much journey in daylight. That's fine - it's only toy trains and not worth anyone getting hurt over.
Posted by Phil Parker at 5:30 AM