Mops, buckets and a first appearence 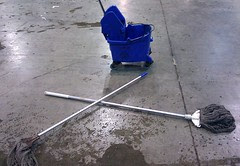 Yesterday, I drove through the snow (I hate driving in snow) to the showground where we were setting up the L&WMRS exhibition.

On arrival, there were a couple of traders waiting on the doorstep so we let them in and started marking up the floor. The idea had been to keep everyone out while we did this, and they were very early, but the weather made this a bit unkind.

Of course, people driving in the side doors caused us a problem - wet floors from snow dripping off the vehicles. I spent most of my afternoon, largely with the aid of well known P4 modeller Steve Lee, mopping away. The hall itself isn't cold so if we smeared the wet around, it quickly dried up. It's just that with lots of cars and vans coming in, there was a lot of mopping!

Anyway, by about 6, we had nearly everyone who was likely to arrive through one of the doors near my layout spot, so I hoicked the Clayhanger Lane baseboards over and set up. To my immense satisfaction, it all worked. Since this is the first time the layout has been put together, that's great news. OK, I know it's not a complicated model, but you still worry.

Anyway, the plan is I'll run a few trains and generally have a play. Mostly, I want to be talking to people. Lots and lots of talking. If you are around, please say hello as I'll get lonely... 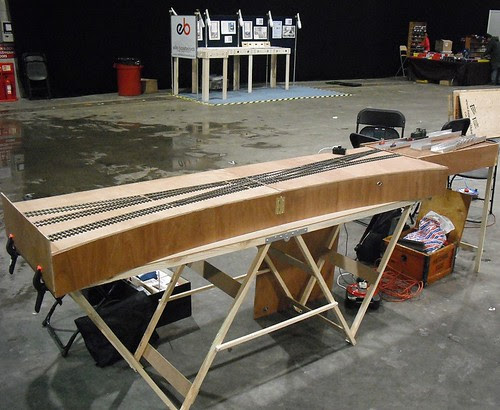 LWMRS Show information
Posted by Phil Parker at 5:30 AM