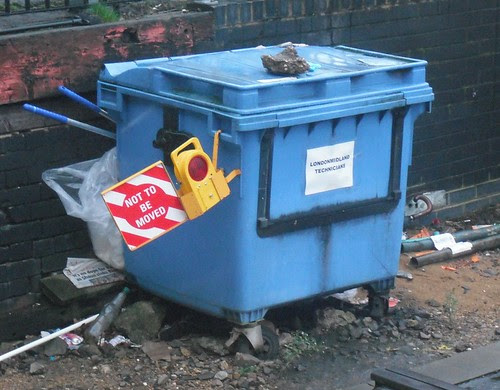 According to the label, this bin is where London Midland technicians are stored at Leamington station. Presumably that means the equipment technicians use and not the techie staff themselves. Not the really good equipment either, judging by the less than state-of-the-art security system preventing burglar Bill from opening the lid.
In modelling terms, this could be rather fun to add to a layout. The wheelie bin might be available ready to use but even if it isn't, something simple could be knocked up from bits of plastic easily enough. I'd make a central box and then add the rim around the edge. Measurements might be interesting, does anyone have a plan?
The "Not to be moved" sign (does this mean the bin or do they hang them on trains while working?) might be more a challenge. Maybe the sign could be printed on the computer and then added to a plastic lamp arrangement. I think an etched do-dad would be nice here as those legs would fiddly but essential. Anyone know a supplier?
Hardest to do would be the bag stuffed behind the bin. Maybe some very thin polythene could be found and screwed up to do the job but it's going to have to be gossamer thin not to look out of scale.
Who says the modern scene doesn't have little corners of life ?﻿
Posted by Phil Parker at 5:30 AM

At work I sometimes purchase bins from Taylor bins of Droitwich. See their website for plans and dimensions - www.taylorbins.co.uk. You too could become a bin-nerd like me...

would cling film do for making the bag behind the bin?