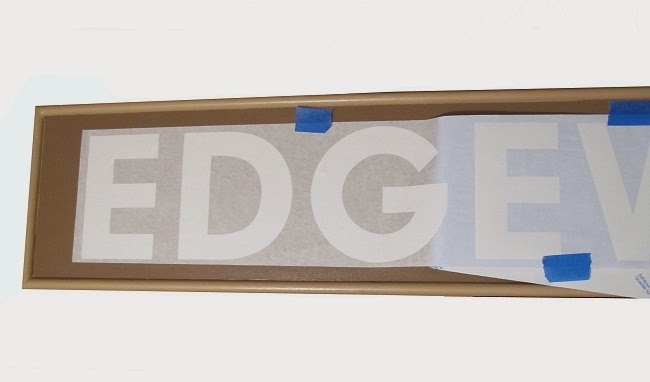 Today's idea isn't new. It's not even particularly revolutionary - I mention it only because in the model railway world, there are going to be a few people who will say, "Why didn't I think of that." and then go away to copy what I've done.

Needing some letters for the Edgeworth fascia panel, I could have gone down the route of individual letters purchased from my favorite DIY store but having tried that on Clayhanger Yard, I wasn't keen on the results. They were just about OK but the vinyl stretched when I stuck them to the wood so some letters were slightly taller than others.

This time, I determined to do better than previous efforts. A quick search for local sign makers lead me to SignDepot based opposite a local branch of Sainsbury's in Warwick. After a quick phone call I was parked in said supermarket and nipped across the road to chat to the nice man in the shop.

15 minutes later I had the name cut out on a sort of super silhouette cutter complete with back and front papers. All I had to do was stick the thing to the fascia.

It's a fiddly job. Taking time to line everything up properly is well spent. Once the letters were smoothed down, the fronting sheet is gently pulled away to reveal a perfectly spaced name in suitably bold letters that will show up from a distance in an exhibition hall.

Cost - A very reasonable £18 including VAT.

Fuller details and photos will be in next months British Railway Modelling.
Posted by Phil Parker at 5:30 AM

I think you mean Sainsburys. Salisburys was a leather shop that used to be on Regent Street Leamington