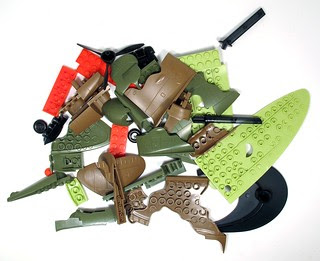 Years ago, I used to look forward to a Christmas addition to my extensive Lego collection. Sometimes the larger and more complicated models that Santa would bring were a bit much for my limited skills and my Dad would be allowed to help. Somewhere we have a black & white photo of him puzzling over the construction of an oil rig.

Anyway, I no longer get Lego, something I'm a little sad about, but that doesn't mean there shouldn't be some brick building fun over the festive season. Early last year, Airfix introduced their Quickbuild range of models. These look suspiciously Lego-like, probably due to the Danish company losing a patent case some time ago, resulting in a rash of lookielikey products which are cheaper but claim compatibility with the original brand.

So, I thought it would be fun to buy my Dad a plastic kit as a present and settled on the Spitfire from the range. I know he has a stash of unbuilt plastic kits so instead of a "proper" kit to add to this, something different that he had no excuse to finish seemed more fun.

Looking in the box, the components are Lego like. A few are almost identical copies. Other are very specific to this model. To avoid the need for paint, the parts are weird wavy shapes to correspond with the camouflage markings.

Construction wasn't too taxing for a 72 year old I'm told and he soon had a descent sized model of the WW2 classic. Stickers for the RAF markings completed the model. Should you be somewhat younger then there is as much play value in this as there would be in a diecast model but here to you get the fun of building it first. 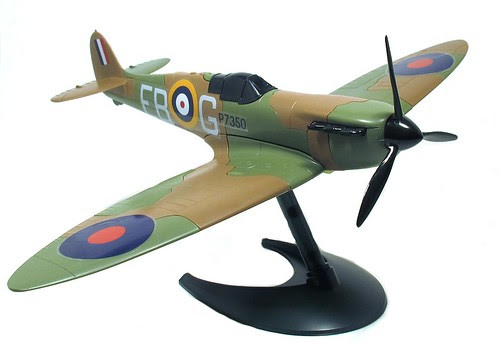 OK, so this isn't the most detailed model in the world but I bet a few IPMS members will have a tinker with them as the shape doesn't look bad. I bet there is fun to be had if you glue the bits together, apply some filler and paint the result.

Is Quick-build the future? Of course not. But if you look at the range, it is a good starting point and this isn't the first time Airfix have dabbled with blocks either - anyone remember Betta Builda ?

Also, the Quick-build system has made its way into the Scalextric range with the Demolition Derby set and also a micro version in this years range. How long before we get something in the railway range?

This looks like a ood idea for my lads. Thanks for the suggestion.

I was surprised by how good the result was...really respectable! I do remember Betta Builda...a very kind uncle and aunt gave me a massive set for christmas when I was 10. I had endless hours of fun with it. Mind you, I still keep my son's Lego collection and often look at it wistfully. I know it wouldn't take much for me to get building...just walk on by...