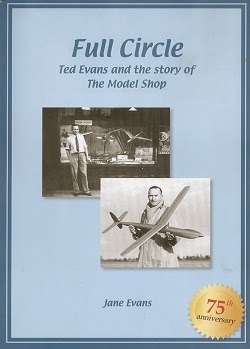 Subtitled, Ted Evans and the story of The Model Shop, this book is a history of both a man, a shop and a hobby.

Ted Evans founded "The Model Shop" in Northampton in 1937. An aeromodeller, he originally saw it as a way of supplying the demand for high-quality materials for those seriously building rubber-band powered model aircraft. "Super Model Aircraft Supplies" - the name can still be seen on small plate above the door today - was a mecca for those 1930s model makers who aspired to the leading edge of competitive flying in the Wakefield Cup.

As a designer of prize winning model aircraft, Ted was well placed to understand his customers needs but clever enough to know that a general model shop would survive the turbulence of the hobby industry better than a specialised outlet.

The book takes us through Ted's life, especially his aircraft designs, but against the background of model making as a hobby. The authors has researched many the history of many major firms producing models and kits including Bassett Lowke, Hornby, Airfix, Mainline, Lima and Bachmann. These all come in to the story at various points in the narrative. Although the main focus might be Ted and the shop, it's really a history of our hobby and how it has changed through the years.

Nowhere is this better illustrated than the title. In the early days of modelling, there were shops a-plenty. Every reasonable sized town would have several outlets and there was next to no mail order. Then the world changed, shops closed and people ordered by post and later on-line. Now, the wheel is turning again and customers are apparently realising the benefit of dealing with real, knowledgeable people face-to-face.

Although not a fat volume at 120 pages, the test is full of fascinating information. I suppose I could pick the odd hole in some of the model railway history but only on very minor points. Presumably the other branches of the hobby suffer in a similar way although being much less familiar with them, I wouldn't know.

What I do know is that if you are interested in history from the perspective of model makers, then this is an excellent read.

Full Circle from The Model Shop, Northampton.
Posted by Phil Parker at 5:30 AM

A fascinating idea for a book...it sounds an absorbing read. I can remember as a teenager we had three model shops nearby...one was a "serious" shop where only the experts went to buy stuff...it was very intimidating with one guy who would sneer at you if you bought a packet of "Merit" figures...how times have changed. I am very lucky in that I can toddle off down to Porthmadog models and get my raw materials without postage or not being able to see what I'm buying.

It's a good idea, well done.

A history of a model shop on its own could be very limited but placing it in the context of the model industry as a whole makes for a much better read.