Book Review: Railways of the Isle of Wight by Marie Panter 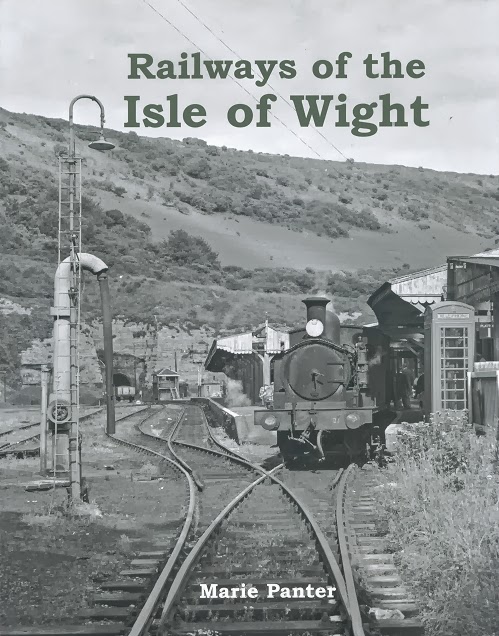 Here is a book that contrary to received wisdom, you can judge by its cover.

The front shows a locomotive at Ventnor station in 1962.

For someone like me, it shows very little chuff chuff and an awful lot of surrounding infrastructure. Look at the slightly higgledy-piggledy nature of the buildings. That telephone box pushing its way in to shot like a chav behind a local news reporter on TV. Plant life competing for space around the base of the lamp and lineside.

Brilliant. Just what I like in books on trains, not very many trains.

Inside we get more of the same. Each line is described and photographed but the emphasis seems to be on the modelable bits of railway and not just the engines.

That's not to say rolling stock is ignored, it's just that this has been covered extensively by others - railway enthusiasts are notorious for ignoring the surroundings and only looking at the engines. Here we've images covering the whole island system dating from 1906 to the late 1970s. As far as I can tell, every single station appears, often several times. Not just the main ones either but all the intermediates stops of which there were many.

The island lines once provided a comprehensive transport system of a type that we don't really see nowadays. When you can't jump in a car and drive from one side of the island to another, communities seems far more individual. Thus, the lines were initially all separate entities, a bit like the system on the mainland before the grouping.

At the back of the book there is even a page on the various schemes to link the island to the mainland by tunnel. Ideas along this line continued into the 1980s.

As a boat enthusiast I especially enjoyed the pictures of rolling stock being delivered by sea. Maybe I should try modelling some of this one day!

Even if you aren't interested in the IOW railways, this is an excellent book. Quality of reproduction is very high with everything printed on glossy paper.

My only real criticism of the book is that complete lack of both contents and index pages. The later isn't uncommon sadly, but no contents page, what happened there?

For £13.95 though, this is a very interesting addition to the bookshelf. One worth many hours of careful study by both transport enthusiasts and modellers.

Railways of the Isle of Wight at Amazon
Posted by Phil Parker at 5:30 AM