Inside the Formo envelope 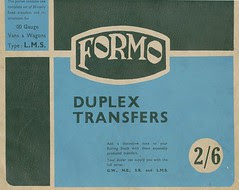 Mooching around my local model railway club one evening, I found an envelope marked "Formo" and apparently containing "Duplex" transfers for use on LMS rolling stock. Since this is a new old name to me, I borrowed the package for a closer look.

According to the instructions on he envelope back, the transfers are printed on duplex paper; that is to say a thin tissue backed by a stouter paper for ease of handling.

Nowadays we'd describe the "tissue" as carrier film and the stouter paper as backing sheet. The instructions make it clear that these are early Presfix transfers. First, you separate the stout paper from the tissue then place this on the model. Next, the tissue is soaked with water and will eventually float away. That's quite sophisticated for the time, which I would guess is the early 1950s.

Also in the pack is some building paper (brickpaper) from Modelcraft. There are many finishes including several versions of brick, some stone, tiles and even stucco. 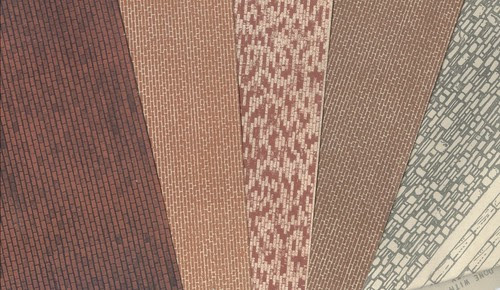 Sheet 23 is especially interesting as it's planking but planking for the decks of model boats. I'm not sure if there were plans to go with this stuff but I would guess that you might end up building a boat to fit the deck if there aren't. The decks look most suitable for yachts which is odd as models I've seen from the time in magazines tend toward the working boat line - Puffers and other cargo vessels rather than gentleman's playthings. 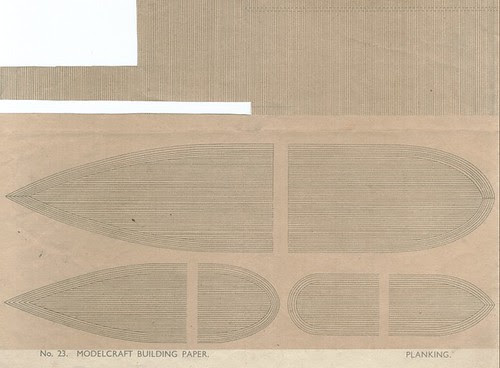 I suppose you might now consider these a bit crude but remember they come from a time when someone had to paint the original by hand. You couldn't do a bit and let the computer fill in the rest! At least this means there isn't the obvious repeat patterns that modern papers can exhibit. Interestingly, the colours tend toward the brown. Is this a result of age or were they just printed this way?

Interesting find. The planking is more for a workboat as yacht deck planking traditionally follows the gunnel and is notched into a King plank down the centre. Trust me, it's a pin to do! Especially plank by plank as I've done on a 1/12th scale model of a Finrose 47 and a Luna 50.