St Albans show turned out to be surprisingly easy to visit from Leamington. If you set off by 8:30am on the Sunday, the M1 is pretty quiet, the trip from the motorway to venue is short and not too fiddly and you can bag the last parking place in the multi story next door which doesn't charge for parking on the day of rest.

There was a bit of a queue when we got there so whiled away a few minutes in the nearby Costa coffee (this is an in-town show) where I discovered you can buy giant sized chocolate teacakes and that one of those and medium hot chocolate is a bit too much choccie in one session even for me.

Once inside, it was crowded but moving around wasn't too hard. Our first objective was to talk to traders finalising bookings for the Leamington show. That meant lots of chat but I did manage to get a bit of layout gawping in too. 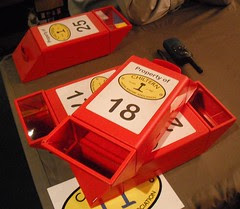 I wasn't the only one. The CMRA who run the show have invested in a pile of plastic periscopes. I recognise these from a few years ago and have asked one of the big noises in the Association if they can tell me where they came from as I'd still love to add one to my layout kit. From a safety perspective, these have got to be a better idea than renting out step stools for children to fall off.

For a change, my favourite layouts weren't the smallest ones in the hall. They were even foreign prototypes. 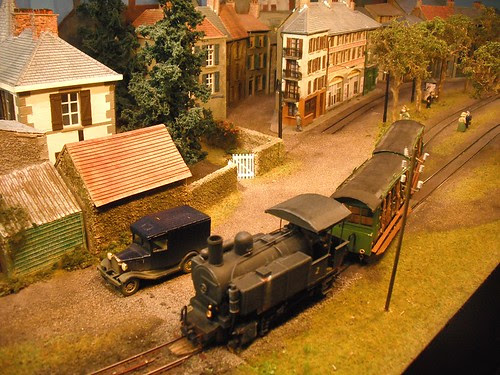 On the stage my eye was first caught by some exquisite, atmospheric modelling of La Baraque. Although using 16.5mm gauge track, the scale is 1:64. To be honest, operation was a bit limited with a single train circling the model repeatedly but that didn't worry me. The star wasn't the steam engine, it was the buildings. The modeller, Hans Lovet, has captured the look of a run down town with slightly crumbling architecture. 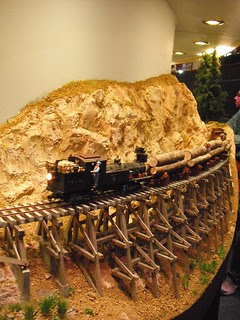 Next to La Baraque, there was Three Chop Roundup, On3 (1:48 and 3/4" gauge), an American layout that also had some cracking modelling going on.

Using a logging line as a prototype, this is circular layout which encourages the viewer to walk all the way round so they don't miss anything. Even the fiddle yard area has a substantial wooden trestle bridge running along its back.

By lunchtime the crowds were still thick so we headed out for some food. Sadly, I missed the turning for the upstairs cafe and we ended up in town again. There was a food fair taking place but the I didn't think I could manage a whole ostrich egg so we settled for a snack in BHS. Sorry, this means no review of the in-site catering but I can report the jammy doughnut was lovely.

Back inside, there is one more layout I need to mention, Christopher Paynes Pynton Tramway Company.

Another odd scale - O9 - 7mm scale on 9mm track to represent 18 inch gauge. The entirely fictitious model assumes someone built a rural line and then electrified it with overhead wires. The builder describes the idea as, "a bit of a stretch" but it's not that different from the Hellingly line which also featured overhead electric running through a bucolic English country scene. 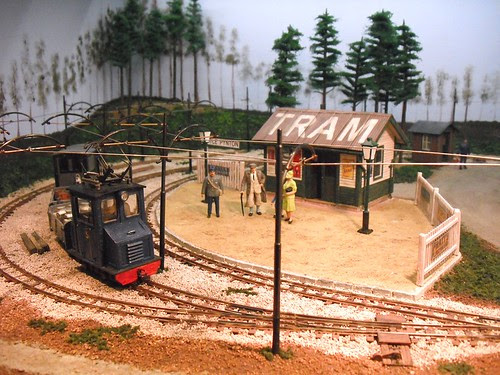 The central station building with "Tram" painted on the roof reminded me of Laxey Station on the Manx Electric Railway although I think there was a Colonel Stephens railway (Rye & Camber?) with a similarly decorated building.

Although a flight of fancy, I think the scene is pretty and although it didn't exist, we wish it had done.

I've scratched the surface of the show here. The quality of the layouts was very high this year but I don't have time to praise every one of them. Instead why not head over to my Flickr gallery to see what I haven't mentioned.

Good news. This is the periscope

But there are other toy versions out there.

Thanks for this Phil. I find it herd to look a Mr. Payne's work and not be inspired to build something like it.

Strangely, "St Albans" is the name of the church I was married in, right in the centre of Tokyo of all places.

I find St. Albans is always a good start to the year.
It ticks all the boxes for me; reasonably easy to get to, always a good selection of layouts and traders, one of the best club sales stands anywhere.......and the atmosphere, the vibe (man) is always very positive.
I have heard some moans about the venue (cramped, some bits inaccessible, etc.) but in some ways I think that contributes to the atmosphere......it helps, too, that the venue is in a city centre rather than at a sports hall or whatever, miles from anywhere.
I always come away from the show feeling inspired and usually bearing new stuff to further my modelling. This year was no exception......a whitemetal tram kit brand new for a tenner (that wonderful club stand!) and various bits of American N gauge plus a lot of ideas!
Andy, CP sometimes exhibits on the continent so it may be worth keeping a look out....after all if it's in Europe it can't be far, can it?
Simon H

I am obliged to Phil for being kind enough to enthuse about the St Albans exhibition and in particular my "Pynton Tramway Co" layout.

Like Simon I always enjoy the St Albans exhibition - as an exhibitor this was my fourteenth time and it has become a good way to start the modelling year.

I had the pleasure of addressing the CMRA Exhibition Managers' Forum in December 2009 and took the opportunity to recommend the periscopes. At the time they were available from a company called Jacobi Jayne (usual disclaimer) and as memory serves were manufactured in Italy. I think I am correct in saying that this year was the fifth they have been in use at St Albans. They seem to be popular and are standing up to regular use.

As well as several UK bookings in the next few months (26 January - Bucks & Beds NG Open day, 5 April - NG South, and 19-21 April - MOMING'14@York), "Pynton Tramway Co" is scheduled to be at the OnTraXs exhibition 7-9 March 2014 held as usual in the Spoorweg Museum at Utrecht in the Netherlands.