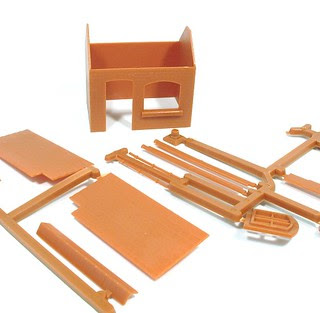 Thanks to Railway Modeller giving away a Ratio plastic hut kit with the latest issue, small buildings seem to be what all the cool Kidz are interested in at the moment. I've had the same kit but found a different use for it.

However, as a demo for Edgeworth, I also stuck the bits together on a Ratio Yard Office. I'm not going to be using it on the layout but...well you'll see when the mag comes out.

The kit is both cheap and simple yet produces a nice looking little brick built hit that is generic enough to appear in all sorts of guises. The best feature is that round topped window which meant the designer had to include a curved brick arch in the wall, something that is the very devil to scratchbuild.

Obviously I wouldn't be proper railway modeller if I didn't moan a bit about it. You could argue that the chimney stack running down the side of the building has been designed with moulding rather than realism in mind since the sides are not at right angles to the back. A bigger criticism is that the brick effect is very lightly marked on the sides. While this might be scale, I'm not sure how well this is going to work with my normal pencil brick colouring methods. I might have to try something different here.

I don't have a project in mind for this but I'll finish it anyway. After all, it seems a shame to have yet another half-finished project kicking around.
Posted by Phil Parker at 5:30 AM