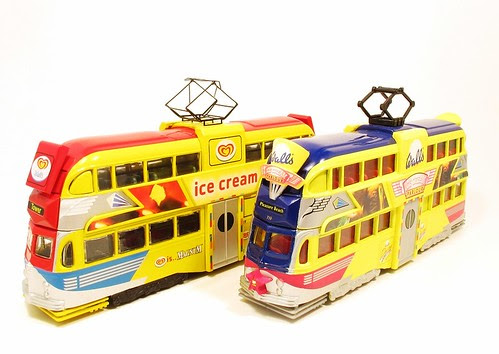 My Dad is clearing out his collection of diecast trams. For years they have sat in a cabinet, protected from dust but doing nothing more than looking pretty. Now he has decided that it's time they went to a new owner and were replaced by all the model railway locos that we have for the various layouts.

I can't argue. Neither of us a serious collectors. All the trams were bough cheap and mostly because they looked pretty. Very few have serious sentimental value and those that do are staying put. Mostly though, they are being packed back in their boxes and will head off to Warwick & Warwick auctioneers later in the month to be sold.

Looking at the models, they are quite impressive for mass-produced items. The Walls trams at the top of this post are especially interesting. On the right is one of the very early models of an advertising tram. The prototype was amazing when it came out and the fact that Corgi went to the trouble of moulding the relief signs on the ends was quite a thing then.

The later left hand version shows some of the improvements over time. The pantograph is no longer a crude plastic moulding but a realistic etched brass model. The glazing is near-flush too. Both are well printed and lovely colourful models.

Still, you can't keep everything and it's time these 70 moved on to new homes. It's easier to do this when you feel that they will be appreciated, hence selling through an auction house. It's a lot easier to do this too as they will collect and do all the hard work. OK, we might have received a tiny amount more selling each model individually on eBay but it's a lot of work and Warwick & Warwick's costs are very low so we'll just get it done. 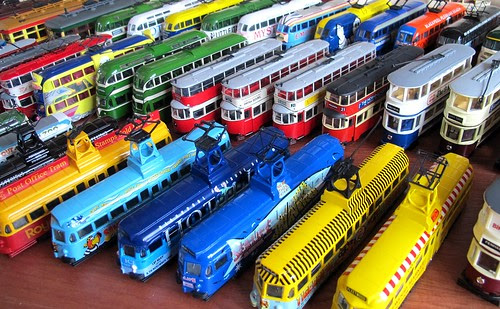 Seventy tram models. I am a jealous man.

Hi Phil,
Would it be ok if I put a link to this posting on the Facebook Tramway Modelling Group?
There may be people on there who would be interested.
Regards,
Simon H

Simon - Please post away. A soon as I know the date of the auction, I'll post it as well. If anyone wants to be kept up to date, if they e-mail me via the Ask Phil link, I'll try to let them know what is happening.