Gauge 1 Garratt seen in the wild 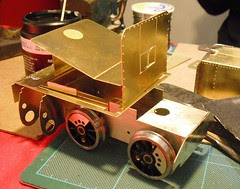 For many years, I've been suggesting to Trevor at Mercian Models that he ought to produce his rather nice industrial Garratt kit, currently available in O gauge, for Gauge 1 modellers. I've always thought that it's a good little big engine and would probably appeal to those in the larger scale.

The idea appealed to him but you can't just blow the etch up, someone has to master all the cast lumps too.

A few months ago, he mentioned that Dave from Cromford models have offered to do this job and so the project looked like it was on.

Last weekend, I saw the first results. Dave was sitting in the basement of St Albans exhibition. I greeted him with, "How's the gauge 1 Garratt coming on?" to which he responded by handing me construction shown in the photo. A real live bit of the model!

At the moment, the model is just etched bits but it looks like progress is seriously being made. This means even more saving up for me as I'll be wanting one of these to add to my collection of unbuilt kits in the future... 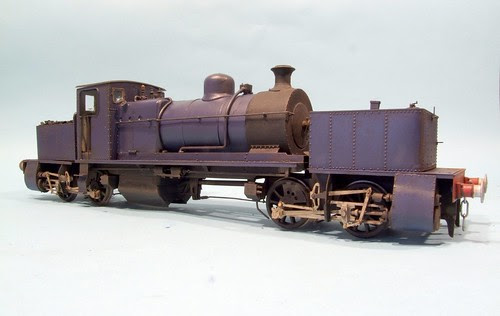