Looking at the shelves of WH Smith, it seems the ones relevant to this blog are "Build the Black Pearl" which I covered last time it was released, "Giant Warplane Collection" with a Lancaster bomber as part 1 that is such a hieous model that I wasn't willing to part with £1.99 for it and the subject of this post - Military Vehicle Collection. 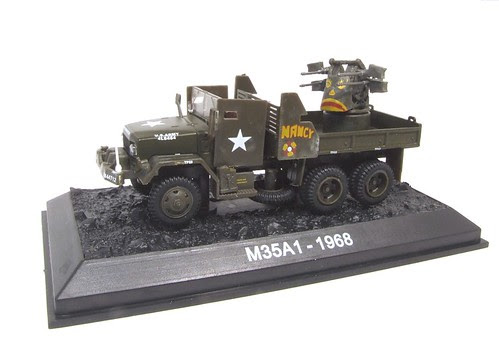 Published every two weeks, each issue arrives with a 16 page magazine that covers the subject of the 1:72nd diescast and plastic model that is attached. Each issue will cost £5.99 apart from Issue 1 (£1.99) and 2 (£2.99). Prototypes span WW2 to today.

Issue one arrives with an M35 truck. An odd choice perhaps but it seems to have been a popular vehicle produced in many variants. I'd guess that we might see the same base model re-appear in the future. This version is one converted into a "gun truck" with four M2 Browning machine guns fitted in the back and some armour plating around this and the cab.

Looking through the magazine, I'd have gone for the version that carried the MGM-18 Lacrosse missile but perhaps that looked a bit toylike. The prototype certainly did. 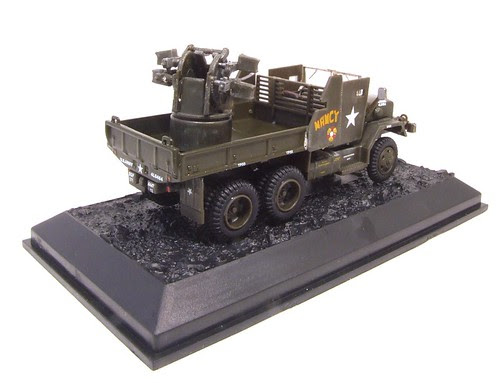 Anyway, at first glance, the model truck isn't that impressive. Self colour plastic parts and painted diecast ones aren't a great mix. There's quite a lot of superglue bloom on them too.

Look beyond that and things improve. OK, the chassis is very basic which is a shame as it's quite visible, especially at the front thanks to those big wheels. The lettering is excellent, wing mirrors are fitted (a different design on each side) and telltales for the front so the driver can see the corners of his vehicle.

I quite like the rocky design of the base too. It's pity that there is a smooth rectangle under the truck, which is screwed down, but with some paint it could look quite realistic.

Price-wise? Not bad even at the full whack. £5.99 compares well with the bottom end of the plastic kit market. The nearest kit I can find will cost you £9.99 although I'd expect more detail, especially underneath.  In diecast models, you are looking at 1.5 Landrovers from Oxford diecast, so not that expensive.

Obviously I haven't signed up for this series - I don't do collecting models like this. If I did, I might be tempted through as we are talking a pint a week for what appears to be a varied collection.

As a modeller, I'm looking at the model and wondering what I can do in the way of weathering to improve it. Well, it did cost less than 2 quid so it's an excellent test subject.
Posted by Phil Parker at 5:30 AM

The M289 was truly toy like in being the prototype for the Dinky missile launcher.