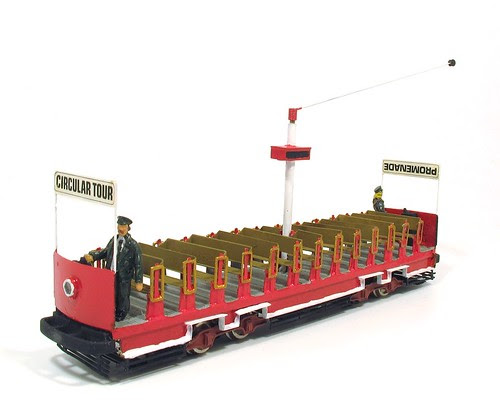 While clearing the display cabinet of diecast trams, a few cars are destined to remain, one of which was my first foray into building etched brass kits.

Designed by Ray Collins and sold as part of the Model Tramcar Design, I found the kit on a second-hand stall at an exhibition. It was cheap enough and I'd spent enough time in the company of "proper" railway modellers to know that soldering bits of yellow metal together was something I aspired to. Not earning very much money at this point, I wasn't keen on spending what to me appeared to be a fortune on a real loco kit so this ticked a lot of boxes.

Beside, thanks to my Dad, I liked trams and maybe we could run it on the layout he planned. At least it was the right scale - 4mm.

As I recall (long time ago), the kit went together quite well. The handrails were glued on as I didn't fancy my chances with solder at this point. Everything else was fixed with the iron though and I'm sure I learnt a lot along the way.

Power comes from a central motor driving rubber cardin shafts and powering the bogies. It's not a great runner but then the motor is one of those 50p jobs and I was a novice at fitting pickups in those days. Not that I'm much better at this now.

With the model unearthed, perhaps I'll one day find time to have a look at the running. Not sure where it will stretch its legs though, that tramway layout is still at the planning stage!
Posted by Phil Parker at 5:30 AM

UK's first tram-trains is subjected to approval, the new Tram-Train will run on the Sheffield Supertram network and on Network Rail from 2016. More details can be found here:
http://www.railway-technology.com/features/featuretram-train-project-sheffield-irr-network-rail-4149853/

Fascinating article Emily. I wonder if they will be made from etched brass too? :-)

It is true that the Mabuchi motor used in the kit is so inexpensive that they are practically sold by weight. However I think it would be wrong to assume that they are of poor quality; they are used in Helping tram models where performance is very good,and they are also used in the Horn by 'Austerity' tank and 'Terrier' tank locomotives, which in my experience are very controllable at slow speeds. They do need high-reduction gearing at around 50:1 for best results; the reduction in the Toastrack kit is I think 12:1, which is the real reason for the mediocre performance of the model.

Congratulations on the nicely-made up kit. You were very lucky to pick one up cheaply!