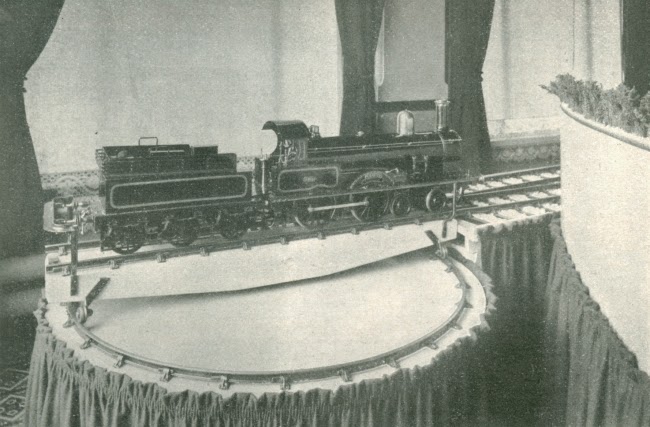 Found in the August 1950 issue of The Model Railway News, is this fantastic turntable. I love the neatly made curtain around its perimeter, not just a plain cloth but something carefully tailored and ruched.
The layout belonged to PH Leigh and was built to a 6 inch track gauge in 1896 by Messrs. Lucas Davies of Farringdon Street, London at a cost of £3,000. According to the Internet, that would be worth £83,000 today. Quite a tidy sum for a model railway!
Not only did he pay for the railway, it was housed in a room 24 by 30ft and featured 520ft of track. There were 2 stations, a tunnel, signal boxes and goods warehouses complete with loading bank.
Coaches were detailed inside with mirrors, goods van doors slid and the loco ate real charcoal.
What an incredible model - sadly it has long since vanished. The article is written by the owners son who entitles the piece, " A forgotten model railway", but doesn't mention what happened to it. ﻿
Posted by Phil Parker at 5:30 AM

And here's one of the engines: