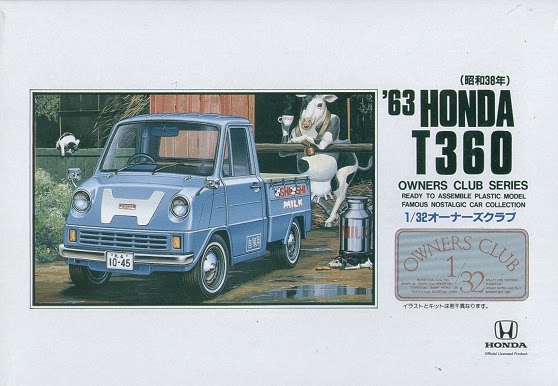 It's a busy time on the workbench at the moment with loads of exciting magazine'y stuff to do and quite a lot of Interewebby and novel goodness going on as well.

A sensible person would sleep a lot but I prefer to have a project on the go that's nothing to do with any of the other stuff. Something that is fun but doesn't matter. Thus, I've dug out a plastic kit I bought on a whim at the IPMS show a couple of years ago.

The Honda T360 is (according to Wikipedia, as much research as I can be bothered to do) was the first production automobile from the company, launching in 1963. 108,920 of the 30hp T360s were produced, all painted a pale blue colour.

The size was determined by the Japanese Kei car regulations intended to get the population mobile on 4 rather than 2 wheels whilst not requiring adequate parking is available - something owners of larger cars have to be able to prove and a very sensible thing too IMHO.

Anyway, I've always had a thing for micro cars and the box art sold the model to me even though I'd never seen one before. That and the kit wasn't expensive and I hadn't bought anything at the big plastic kit show that day... 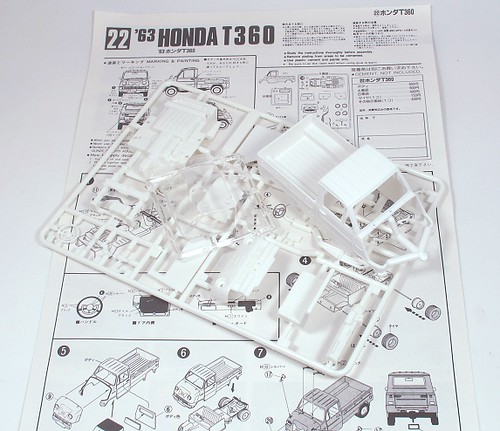 Inside we have white bits, clear bits and rubber tyres. Metal axles too and a nice set of decals (transfers but I suppose we use the American for a Japanese kit). Amusingly, in large print are the words, "For Japanese Use Only" by a set of Japanese characters. No idea what they say so I might be doing bad things that I shouldn't. Not my fault Gov, couldn't read the instructions.﻿