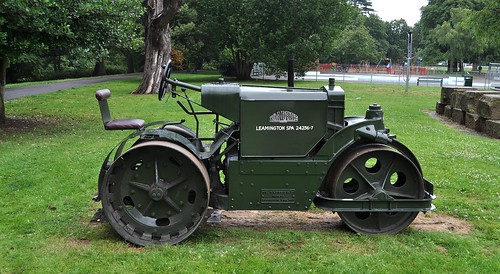 Ahhh, the memories. Victoria Park in Leamington Spa has been a favourite spot for generations of children. I remember as a kid playing in the pipes set horizontally in the ground, climbing over the concrete covered blocks (this is nice than it sounds, they look like giant lumps of yummy shortbread), playing in the paddling pool, "driving" the steam and diesel rollers stuffed and mounted on the grass...

Now, only half the blocks and a paddling pool are still to be found. Everything else has long since gone. Admittedly there have been more modern replacements but I can't see why the big pipes had to go.

Anyway, obviously the rollers are long gone, but one of them returned last Saturday. It's owner is an old friend of mine - Anthony Coulls. Now a bigwig at the NRM, he saved the roller for the nation, getting it running with the help of some friends. 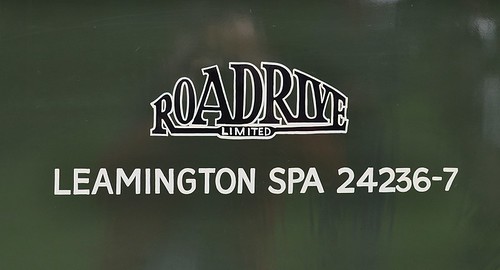 Restoration to its full glory came later and it now normally lives at Beamish museum.

He was persuaded to bring it home after a request from his old school. While here, it seemed a shame not to return it to the spot it had been when he first encountered it. I'm sure if the depot it had worked out of was still there, a visit would have been paid too.

As it was, at 10am, a group of us gathered to watch the roller fire up. A photographer from the local paper arrived to record the occasion and then Anthony set off on his transport through a couple of Leamingtons busiest roundabouts at a steady 4 1/2 mph. Later in the day, it reached the school where it was awarded a prize as the exhibit most likely to be injurious to heath!

Apparently this was pretty much right - 11 1/2 miles of trundling wasn't a lot of fun I'm told!

It's looking very smart with the lettering now on the motion covers, and great to see it 'back home' in the playground. :o)