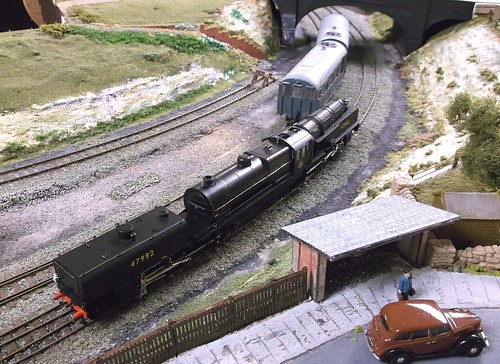 If you know my layout collection (and if you don't, look at the lovely links down the right hand side of this blog) then you will realise I don't have a layout suitable for a large articulated locomotive. Not to worry, I took the model down to my local railway club and asked politely if it could enjoy an outing on Duxbury.

The team agreed that there was no problem and cleared some track for me. What I didn't know was that the week before, another Garratt had broken down while being run and I suspect that just wanted to see how long mine would last.

Anyway, off it went around the circuit. All seems to be well with the loco running properly in both directions without falling off the track.

You'd expect that such a large chuffer would be the most eye-catching thing on a layout, but not that night. This prize has to go to David Roots and his scratchbuilt model of a 1700HP double locomotive built by Armstrong Whitworth in 1932/1933.

The prototype entered passenger service with the Buenos Aires Great Southern Railway in 1933 and was retired in 1960 because service parts were no longer available. It was scrapped in 1965. The model is scratchbuilt on to Lima chassis based on information in a book about Armstrong Whitworth diesel loco developments.

Strictly speaking, it should run on scale 5ft 6in tracks so it's seriously under gauge on 16.5mm but no matter - it's a fascinating model. 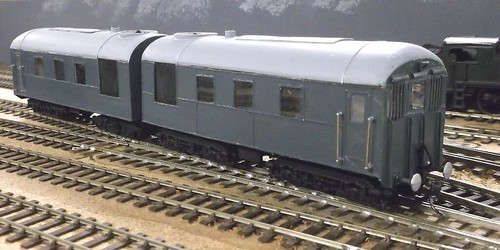 and just to prove my Garratt runs, here's a very short video.