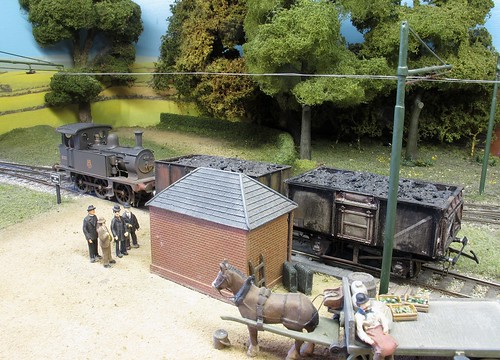 Late in 1962, P Class tank engine 31325 drops off a couple of loaded coal wagons on the weighbridge at Hellingly Asylum. It is the usual practise for each wagon to be weighed both in and out of the hospital as the governing board are concerned that suppliers might take advantage of the health service to under supply.

Of course this never happened, but had the hospital railway survived past 1959, it could well have done. At the time BR were concerned about the state of the trackwork that their wagons would be travelling over and had forced some to be upgraded to make a point.

Assuming the electric locomotive wasn't available, the only alternative that could have been hired from the main line was an ex-SECR P class tank engine. The class with a 10 ton axle load was passed for the line even though none ever ventured up there.

The scene is shot on my model of the Hellingly line and is the first time I've ever been able to put it together as the layout normally lives stored away and hasn't been out since I've owned a suitable locomotive - built from a Wills Kit. The wagons are Parkside kits.
Posted by Phil Parker at 5:30 AM