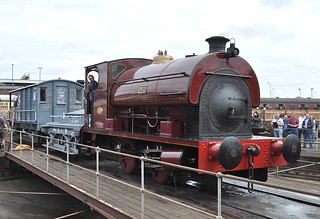 It's years since I visited Tyseley loco works. Back when I was in short trousers and it was all fields around here, the fledgling railway centre was planning to restore locomotives and build a roundhouse.

Well, they are a flourishing business restoring locomotives for people but there is no sign of the roundhouse, all turntable action being alfresco.

Not to worry, having parted with a tenner for entry, I was greeted with both crowds and many large steam locomotives hissing away. I'm not sure that most preserved lines could muster 4 express passenger types and a three shunters in steam at one time. The lack of running track makes this either more impressive of mad in a good way.

When I arrived, a saddle tanks along with a shunters truck and brake van was on the magic roundabout playing to an audience of camera toting enthusiasts.

Working my way through the buildings, there were second hand books aplenty - many at stonkingly bargain prices. Had I the shelf space and the strength to carry them, bound copies of Railway Magazine at £2 each would have been very tempting. As it was, my rucksack was pretty heavy by the end of the day with several volumes that I haven't seen before. 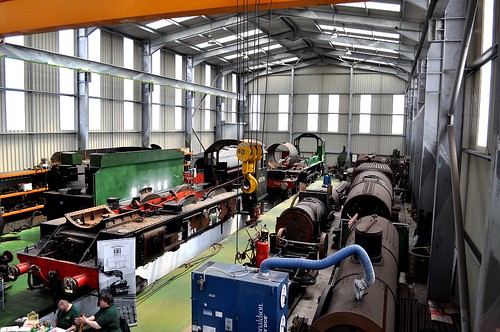 The main shed was chock full of locomotives being restored. This makes sense to me. Skills required to make a steam loco work are rare. Rarer still is the equipment needed to do the job properly. Handing the job over to professionals will be quicker, if more expensive. Raising money isn't as hard as finding people willing to do mucky, dangerous and heavy work for many years.

Past the shed, we could see the end of the site where the shuttle train terminated. This ran with a London Transport Pannier Tank on one end and the chuffer from Harry Potter on the other. This might seem over-powered but not nearly as much as the two GWR tender engines (sorry, didn't note the names) and Duchess of Sutherland coupled up to each other and running up and down.

This is what happens when you give enthusiasts big trains to play with. It is a good thing.

A few days after the event, I was in my local model shop and one of the regular was moaning he didn't go because it was too crowded and you wouldn't be able to take a decent photo. This is probably true, but then I'm not sure but I think there are already photos of all the locos there already so does anyone need another? 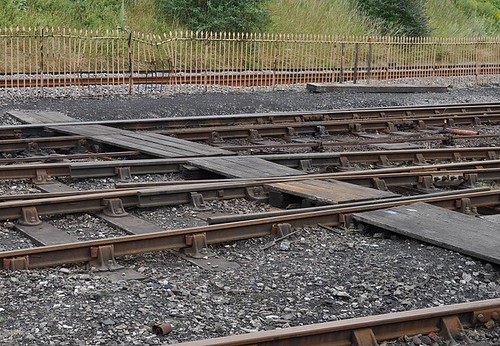 Me? I took some of those pics but I also snapped the rather more interesting and modelable barrow crossings and shed detritus. This is a proper, working steam shed after all so there is loads of stuff that would have been there in steam days. Far more useful - or maybe that's just me.

Photos on Flickr. With some steam locos.
Posted by Phil Parker at 5:30 AM