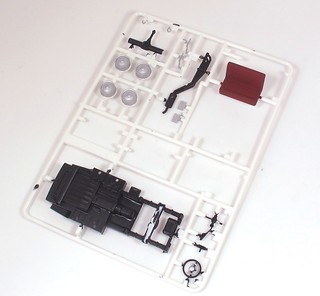 Nice neat paint jobs start with restraint. Don't stick all the bits together than then try to paint them, splash the colour while they are still on the sprue. Then let them dry. Be careful with the glue when you do begin assembly too.

Anyway, chassis bits are painted with Humbrol matt black using a brush. This is normally a good brushing paint and so it proved again with a single coat providing excellent coverage with not a hint of brush mark to be seen.

For variety, the exhaust system is covered in Mr Hobby (a Japanese paint so appropriate) Dark Iron. This stuff prefers spraying but if beaten with a Tamya paint stirrer will 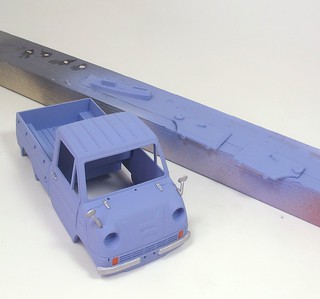 condescend to brush. It's an odd colour, not black or dark grey and slightly shiny. Not sure really, but it's underneath so doesn't really matter. I can see uses elsewhere though so a handy test.

Bodywork should be baby blue, or invalid blue as it's called when applied to Volkswagens. I didn't know this when I started so used a pot of Humbrol 157 - Azure blue. To be fair, I'm not wildly out as the appeal of this pot was that the one thing is isn't is Azure blue. More a pale blue/mauve colour. Pretty but nothing like a pair of denim jeans, which is what I hoped to paint when I bought it...

Anyway, the body was sprayed along with some interior parts. Only after I'd done this did I realise that there is no positive fixing for the wing mirrors so they had to be fitted with superglue. And I got one in the wrong place and had to polish away the glue before touching up with thinned paint and a brush. I don't think you can tell.

I still like the colour though.
Posted by Phil Parker at 5:30 AM

Hi Phil, I understand that Humbrol's Azure Blue is now a good match for the colour used to paint the underside of Spitfires for North Africa in the early 1940s. There should be a thread somewhere in the Britmodeller forum if you are really interested! Cheers,

I like your shorts comment :-) This colour looks rather fine, especially if matt. It has a cool hue that would be good as a base for weathered commercials...and this one is looking very good so far.

It's all covered by the discussion I mentioned -- stick "britmodeller humbrol azure blue" into Google. (You may want to start around page 11!) Humbrol evidently didn't want to repaint the lids... ;-)

Interesting - if somewhat long discussion. I have done the same as the guy on Page 11 did and repainted the lid of my can.

Still a nice colour too.