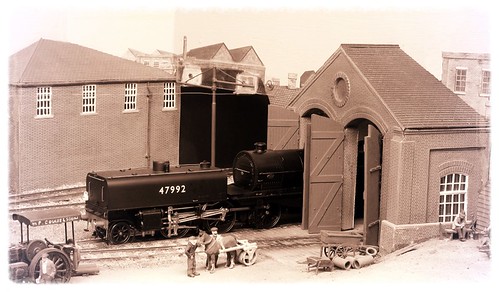 During the cold war, the government was concerned that in the event of an enemy attack, supplies of oil would be significantly reduced and the electricity supply would be almost non-existent in many areas of the country. To keep the rail network operational, small numbers of steam locomotives were removed from service and stored at discreet locations around the country. The so called "strategic reserve" have remained hidden to this day, awaiting the call to action.

Garratt number 47992 found itself moved to the Hellingly Hospital railway which as a private line was considered ideal for keeping rolling stock away from prying eyes. The staff were sworn to secrecy and any patients who told people what they had seen would be swiftly dismissed as madmen, which of course many of them were.

This is of course, rubbish. If there is a "strategic reserve" then it remains well hidden despite the best efforts of railway enthusiasts. I can be certain that the Garratt wasn't hidden in the shed for a couple of reasons; firstly it was far too short. You'd not get half a power unit in there. Second, the shed was demolished in 2006 and I think a large steam engine would have been spotted!

The model loco ran surprisingly happily along my tiny layout and fitted in to the shed very well. I'll not be using it in the future as it's over a quarter of the length of the scenic section...
Posted by Phil Parker at 5:30 AM