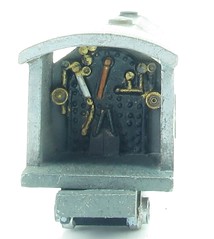 Nearly done with the armoured train - just a few finishing touches for the model.

Despite being all but invisible on the finished model, there is some nice detail work on the backhead. I decided that even on a wartime locomotive, the driver would probably spend a little time polishing his brasswork. Besides, it's easy to pick out the pipes with a tickle of brass paint and they look nice. Some red on the regulator and white on the gauge glass finish the job.

All this is hidden because the driver figure is standing up and leaning on the cab roof. To see the interior you will have to peer around the side of him!

I quite like this touch. The manufacturers know this is being sold as a static model and as such, have modelled it in this way. Guns are drawn and searching the sky for the Hun. The driver could sit around but he'll be keeping an eye out for places strafing the beach and risking his boiler even if it is armoured.

At the back, of course, we have some nice real Welsh steam coal in the tender. This step is so common, it probably doesn't warrant a mention in articles any more but if you leave it out... 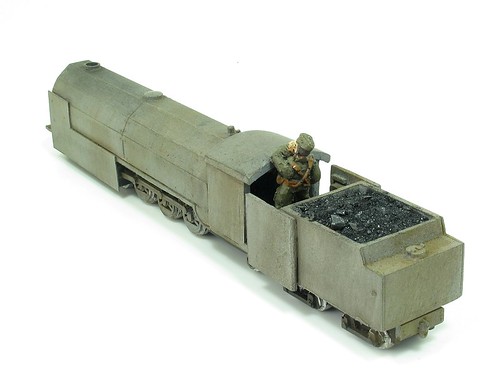