SmallSpace Sci-Fi and a milestone

Yes - Since 31st December 2005, I've been posting about modelmaking, toy trains, radio controlled boats, old cars and other practical stuff. According to Blogger, this is the 3000th such post, so those of you who've only joined recently have some catching up to do!

It's tempting to start reminiscing about old posts, especially as I'm very busy at the moment and a bit light on interesting stuff to write about, but no, let's have a look at something a little different.

SmallSpace Sci-fi festival takes place in a Buckinghamshire village hall every year. I've been before and it's fantastic. This year was no exception.

In the car park, there are Daleks. Just as you get in, you find Davros. Inside, Matt Irvine has brought along the Liberator, ORAC and a Blakes 7 teleport panel you can play with. For those who grew up in the 1970s, this is fabulous. 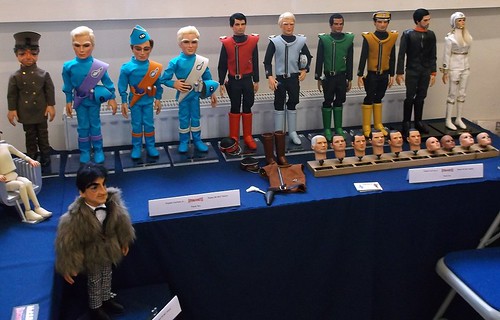 Around the corner there is a line-up of Gerry Anderson marionettes covering the spectrum (which is green) of his shows from Four Feather Falls to Captain Scarlet via Thunderbirds and Stingray. They aren't the only ones either. In the back room another figure makers has produced specials such as Alan Tracey from the weird dream sequence in "Thunderbirds are GO" 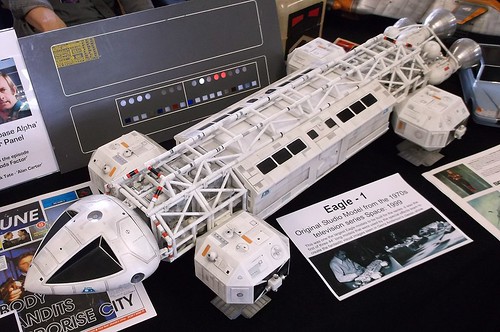 Pride of place though, goes to all the Space 1999 stuff. A real, original and beautifully restore 44 inch long Eagle Transporter was to be found amongst some excellent replica models from Red Dwarf and Thunderbirds. Chatting to the owner/restorer, it seems that the models were pretty badly treated during filming so there was a lot of work bringing the model back to life.

In the back room, a replica Eagle the same size was surrounded by other models based on the series. Their builders were fascinating. It seems that if you fancy making your own Eagle, you need to pick a specific episode as the programme makers used to repaint and re-assemble the craft pretty randomly so they were always changing.

Cakes from the K9 cafe were excellent, as was the sausage bap. We were surrounded by people dressed as Dr Who, mostly Tom Baker, to make it extra interesting.

Finally, how about a knitted Dalek? Behind a stand of superb modelling, I think this caught most people eyes. Well, it's certainly different, quite a challenge in that display!

Congratulations on 3000 posts. Your work is excellent and inspiring. Keep it up.