Cheers! It's time to raise a glass to the August issue of British Railway Modelling!

My main contribution this month is a model beer festival - well this is the summertime magazine and what could be better than spending a few hours sampling different brews at a country beer festival?
Research involved many years of visits to the Harbury Beer Festival which takes place in Harbury at the village hall. Around the building is grass and a car park on to which drinkers spill out to enjoy the summer afternoons and evenings.
Since there was already a suitable building in my stash from a previous BRM project, as well as a couple of ready to plonk alternatives in both the Hornby and Bachmann ranges, I had thought this would be a quick and easy job.
To make matters more interesting, some animated drinkers have been included. The biggest challenge with these being the covering up for their traditional German drinking costumes.
As it turned out, the hardest job was making strings of scale-sized bunting. After a few trials, I came up with a slightly fiddly method that seems to work. I look forward to seeing loads of layouts bedecked in the stuff now. 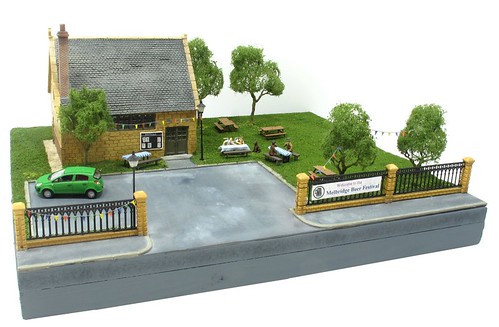 Elsewhere, I'm wiring up a layout, stripping paint from plastic and trying out electric glue. You also have an extra feature alongside Howard's etched brass 7mm signals where I take a look at a rather cheaper plastic 4mm version - lack of space has led to this being over on the BRM Blog - so many good things to fit in!
All the above, and more, is in the standard magazine. However, if you take a trip to WH Smith, you can try out a special "Premium Edition" of the mag for £4.99. In addition to all this good stuff on the page, there is a BRM TV DVD with specially filmed content for you to enjoy on telly. 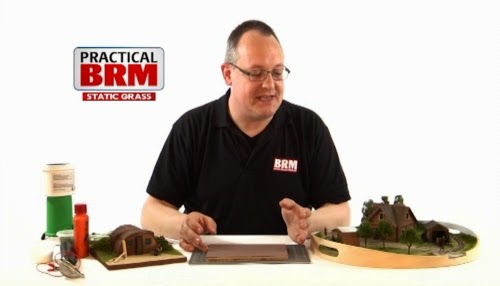 Some things are easier to explain on film than they are in print. Electrostatic grass is a good case in point. Every magazine has mentioned it in projects but if you are wary of getting your hands dirty, you can watch me create a patch of grass in front of your eyes.
Not only do I make the grass, I'm explaining how to go a step further and turn it in to scruffy undergrowth.
Being filmed is an interesting new experience for me. I have watched the results through my fingers (how do people manage to watch themselves on TV?) and it's not too bad. I fluff my lines a couple of times but that's because I didn't write a script before hand, preferring to work in the same way I do talks. It's not too bad and the camerawork is very impressive - you can really see what I'm doing. Do let me know what you think though. 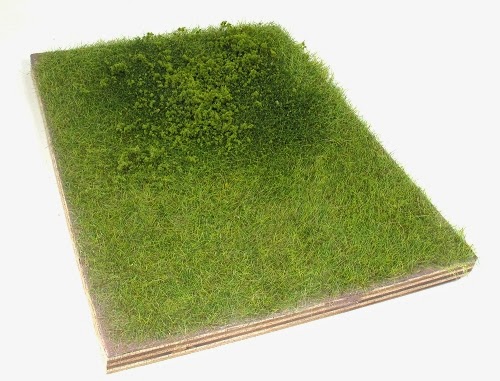 Hold on a second. I subscribe to the magazine so I don't miss an issue, yet I'd get a better version if I went to WH Smiths. How on earth is that right? Especially given that BRM have my money up front. Am seriously annoyed by this, more so than the fact that when flicking through the magazine yesterday two of the layout articles are simply rehashes of articles I've seen in other magazines within the last year. It's getting highly likely I won't be renewing my subscription when it expires.

(sorry for ranting on your blog, but as you can tell this has really annoyed me this morning)

As well as going to WH Smith, you'd need to spend an extra £1.49 for your copy above the standard issue price. For that you get the DVD on top of the normal mag and layout suplement. Subs cover standard mags only, and this premium is a one-off at the higher price.

Layouts are a problem for all magazines. Owners are asked if they will be appearing in other publications and if they are, we normally delay their appearance unless there is a subtantial difference in the approach from one mag to the next. Some don't admit it, some tout their model around every mag trying to clock up appearances in a full set as fast as possible.

Even when they are well seperated, layout owners write the words and some have a very limited imagination when faced with a blank screen to fill with around 2000 words. Thus, you get a very similar write-up each time and if anyone buys several mags, they get to read the same things.

The main problem though is lack of layouts. The four main magazines need 15 a month betwen them, or 180 a year. Are there that many layouts out there that will photograph well? It's hard work finding them. Some people push their latest efforts to editors but others have to be cajoled in to writing up their project. Ideally, we'd probably do the write-up in-house but that means paying a staff writer AND the layout owner each time.

Ah, the WH Smith version is more expensive, that makes me feel less annoyed. I'd assumed it was some kind of special for them at the normal price.

As for the layout articles I can understand the problem of finding enough layouts, although there was a thread on NGRM recently where someone mentioned that most magazines don't feature many narrow gauge layouts so maybe that's an area to look at. Mind you I know there have been a few narrow gauge articles recently so maybe they are reading the wrong magazines :)

I'm surprised that the magazines actually allow layout owners to right articles that are so similar to previously published versions. I write articles as part of my job (university researcher) and often journals and conferences won't let you submit to them if the article is under submission somewhere else, and once it is published and later articles must be substantially different. Not just a re-written version but new outcomes and results etc. I would expect the same to apply here; only a new article when there is something new to talk about. Isn't it also a copyright issue? Some of the articles are so close, if the authors transfer the copyrights to the magazine then the later articles are probably very close to being copyright violations.

Sorry again for the rant yesterday, I'm actually very impressed that you published it and responded, thanks!

Articles sold to magazines, including those for layouts, are on a "first serial rights" basis so once printed, copyright reverts to the writer - hence no legal issue, even if the same words are re-sold.

Mags don't want duplicate articles but it can be hard to spot them. Few staff, lots of words to read so they might not be spotted. Also, it can be time-consuming to get the words from some authors and if you up against a deadline, going back and asking for a re-write might mean you're looking for a replacement piece while the author works.

As far as being under submission elsewhere - the only way to check this is to ask the author and hope they tell you. No-one can ring around their competitors and ask, "What layouts have you got over the next few months?"

Narrow gauge - lots of interest and they stand as much chance as anyone else although the readers do prefer something familiar, hence the preoponderance of BR steam/diesel layouts.