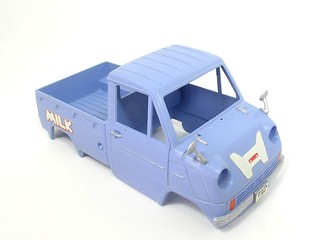 Time for a bit of an experiment. The paint on the T360 is matt and transfers prefer to sit on gloss - if microscopic air bubbles are trapped underneath you see a silver ghosting effect.

So, I did out the venerable bottle of Johnsons Klear and decide to try it out. A few coats sprayed over the bodywork and that matt paint is turning shiny. Quite nice really.

A good drying under the hair dryer followed by an hour in the box and I'm ready to apply what the manufacturer calls Decals. There is very little in the way of carrier film around the edge but some seem to be too large for their intended spots - especially the number plates and dashboard display. The latter is trimmed with a knife, hardly ideal but better than having it poke out of the binnacle. 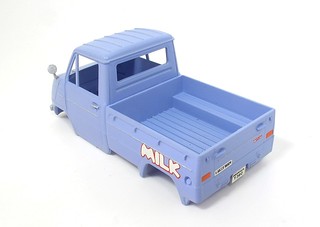 After this, some Micro-Sol products are plashed around to settle the transfers properly. This makes them cockle up a bit but no worries - I've seen this before and normally they pull flat again.

Not this time, the big H on the bonnet stays as wrinkly as a Tracey Emin sheet so it's more Micro-sol and some delegate prodding with a paintbrush. Eventually it's OK and the model gets to dry again.

To finish up, a spray with Humbrol Satincote brings all the sheen's together. I don't like high gloss models and this looks about right.