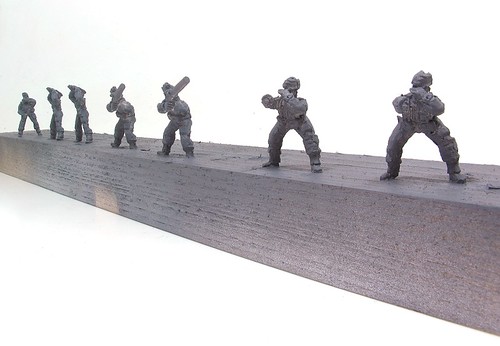 Seven tiny soldiers are supplied with the armoured train. To keep the costs down only four different poses are provided.

This isn't a real problem as the gunners are mostly hidden in the carriages and the plane spotters are holding binoculars and pointing at the sky. Ask someone to do that and they will adopt the same pose and anyone else so that is fine The trick will be to point each little metal person in a different direction and no-one will notice.

My usual method for painting starts with superglueing each figure to a bit of wood. I've sprayed them with primer so the detail shows up. Those figures hidden in the train aren't as well detailed as those standing outside. Another sensible move really as you aren't going to see much of them in there.

Primer is from Modelmates and looking at the photo, I could probably give them all another shot to improve coverage. I don't want to hide any detail though so this will be adequate. Despite what people say, enamel sticks pretty well to whitemetal as long as they aren't heavily handled afterwards.